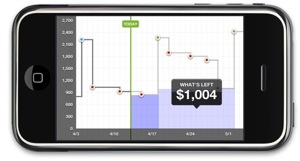 There’s been a lot of buzz around personal finance websites like Mint and Wesabe, but finance software maker Intuit has joined the online fray too– and no, not just by sending threatening letters to Mint. It launched its Quicken Online service back in January 2008, and made it free in October. Now it’s rolling out an iPhone application, which may turn out to be just right for the “paycheck-to-paycheck” users that Intuit is targeting.

Jim Del Favero, Intuit’s product manager for Quicken, tells me the online service is meant for a very specific audience — not the financially responsible folks who use the desktop version of Quicken, but rather people more like, um, me. In other words, people who are a lot less savvy about these financial issues, and who use Quicken Online is less to track long-term financial goals or managing dozens of accounts, and more to letting find out whether they’ll have enough money to make rent. An iPhone app is a great way to reach those users, because it allows them to check their finances as they make purchases, and because iPhone adoption is reportedly growing the fastest among consumers making between $25,000 and $50,000 per year.

A lot of the features in the Quicken iPhone app are also available on the website, but judging from the demo Del Favero gave me, they’ve been ported over effectively. For example, you can bring up a chart showing the ups and downs in your finances, use the iPhone’s touchscreen to zoom in on specific areas, and tpa on specific points to see which transactions ravaged your account. You can also see how much money you have left to spend — not just how much is still in your account, but how much is left after you subtract all your upcoming bills and other financial obligations for the next 30 days — and it’s nice to be able to check that right before you get in line to buy that new electronic toy.

There are also two features that would only make sense on a mobile app. For one thing, you can manually enter your cash purchases and have them uploaded into your Quicken Online account. That’s much more feasible that trying to write down those purchases and entering them when you return to your computer. And when you run out of cash, the app uses the iPhone’s GPS to find nearby ATMs, and identify which ones will charge a fee and which ones will be free.

Oh, and despite the fuss about Mint hitting 1 million users, Del Favero says Quicken Online crossed the same mark on April 11, and is now up to around 1.15 million users.