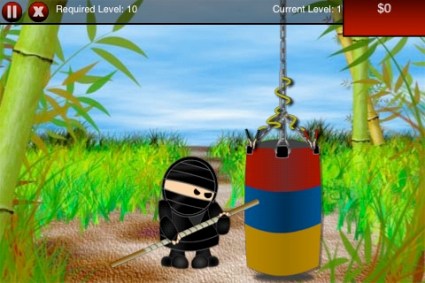 Ninjas and iPhones are a good mix. That’s clear to Axo Studios, which is launching the deliberately ungrammatical game, I am Ninja, on the iPhone today.

The game is based on the Ask a Ninja brand, made famous through wacky video podcasts on the iPod. Those shows, where a ninja (speaking in what I consider to be offensive faux Japanese accents — call me a party pooper) answers questions in a comic and irreverent manner, have drawn millions of viewers on the iPod, the Ask a Ninja web site, and YouTube.

Now the game (here on iTunes) will pick up where the show leaves off, allowing iPhone users to act out their ninja fantasies as they beat up bad guys and perform various stunts. As far as violent and bloody games go, this one is cute. The two-dimensional ninja characters are like something out of South Park, and the sounds are goofy. The main game is dubbed “Confrontation,” with the subtitle “Just another word for killing people.” In it, you kill pirates, zombies and evil ninjas with blow darts. You can upgrade your weapons, such as fire arrows or “Da Bomb,” along the way. You can aim using the iPhone’s accelerometer and shoot by tapping the screen. If you die, a ninja character asks you, “Where did you learn to blow?” 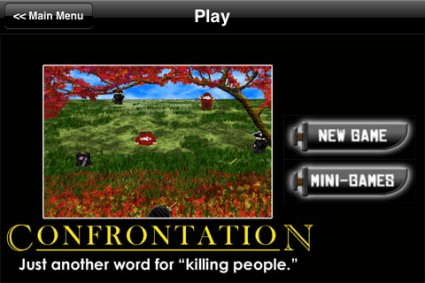 The game has features for show fans, such as a built-in viewer for watching Ask a Ninja videos. There are mini games within the game where you can balance on a pole or shoot arrows at ninjas. You can submit your score to the global scoreboard. There’s also a running contest where the top 10 players of the day earn the right to view a secret video.

Hamid Shojaee, chief executive at Axosoft in Scottsdale, Ariz., said his seven-year-old company is a project management software maker that started making iPhone games on the side in January. In February, at the TED conference, he met with the Ask a Ninja 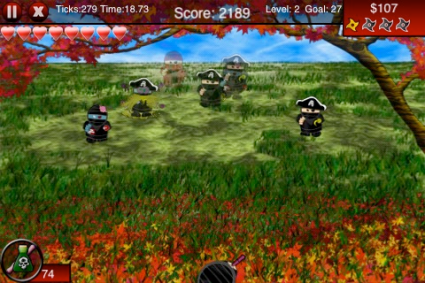 founders at Beatbox Productions and agreed to make an iPhone game based on the brand. They agreed, as suggested by TED speaker Sylvia Earle, to donate 10 percent of the proceeds to the Deep Search Foundation, a nonprofit headed by Earle, whose aim is to save the oceans. The game is called I am Ninja after the theme song of the podcasts.

It took the team of six developers about two months to make the game. If it does well, Shojaee said he may spin out the studio from Axosoft as Axo Studios. This is the studio’s third game. The first one was a Frogger clone with a ladybug as the main character. The second was iScream, where you tried to scare someone in a maze. Both were considered experiments, while I am Ninja is a major commercial effort.

The game is selling for $1.99 on iTunes. Below is a video of Shojaee talking about the features of the game.