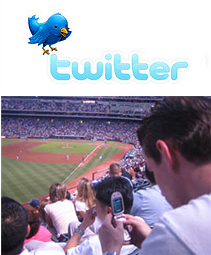 The majority of people who send text messages on Twitter are male, according to a study released by Nielsen Mobile, a mobile market research company.

The study which studied usage of SMS during the fourth quarter of 2008, found that some 57 percent of Twitter users are men, while only 45 percent of users of Predicto, another texting community are male. The study was publicized by Predicto, which is a New York based private company focused on mobile games and is clearly eager to market itself to advertisers as a great alternative to Twitter because it appeals to women as well.

Be sure that the Twitter-gazers are going to start asking what this means. The most predictable response is that males are quicker to adopt newer technology (and taking the extra step to learn how to Tweet through SMS might be take that adopter edge). If that’s not the answer, what can explain the urge by men to tweet their thoughts more than women, who have the reputation of being, well, shall we say, more communicative? Or is there another answer, ie., that men feel the need to propagate their thoughts in public more often, as this juvenile video suggests (see bottom of post)?

Oh, and keep in mind that this study was conducted in the fourth quarter, which in my book was still before it really went mainstream. Twitter really first hit the unwashed masses in March.

Twitter’s service has spread like wildfire in the past year, the report found, to take the leading position in terms of share of SMS transactions with carriers such as AT&T and Verizon. During the fourth quarter of 2008, it bypassed other free mobile services including ESPN, Facebook, and Google.

Predicto said it led among paid SMS-based mobile communities and increased that lead over second-place NBC in the second quarter.

PS. I tweeted this story.

You can find me on Twitter here along with fellow VentureBeatniks Anthony Ha, Eric Eldon, Dean Takahashi, Camille Ricketts and Terrence Russell. We have a VentureBeat account (for our posts) as well.