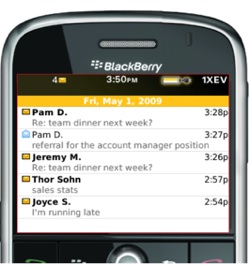 For people who love both Gmail and BlackBerry‘s built-in email application, Google has an announcement today that should make you pretty happy — it’s bringing “push” notification and synchronization to the integration of its software bundle Google Apps with BlackBerry. So even if you’re using BlackBerry’s email and calendar applications, you’ll get some of the richer features you’d have if you accessed Gmail and Google Calendar directly.

The target audience consists of BlackBerry users who are comfortable with BlackBerry applications, but whose companies use Google Apps, or are switching to Apps now. Again, Google already offered its own apps for the BlackBerry, but they had their own interface and their own shortcuts, which could be a big barrier for longtime BlackBerry fans. And you could of course download your Gmail to the BlackBerry app, but it was through basic, POP notification.

The new features use the “push” notification that BlackBerry-maker Research in Motion announced earlier today, as well as synchronization, on the BlackBerry Enterprise server. So users will be notified whenever they receive new emails, and they’ll also be able to archive and star their Gmail messages while in the BlackBerry email app, and to sync new Calendar appointments and contacts from their phones to Apps.

It seems a little silly to me to have an email account on Gmail, whose interface I love on both my computer and my iPhone, and then use a different application to access it. Still, I realize not everyone feels that way, (not even everyone at VentureBeat, ahem), particularly among BlackBerry users, and certainly this helps eliminate another objection to using Google Apps, especially among big companies that are leery of both online software and more consumer-oriented smartphones like the iPhone. This integration will be available starting in July for Premiere and Education Apps customers.

This isn’t the only mobile announcement that Google is making today, by the way: It also added tools for users of its mobile social networking service Latitude to share their location with the public.