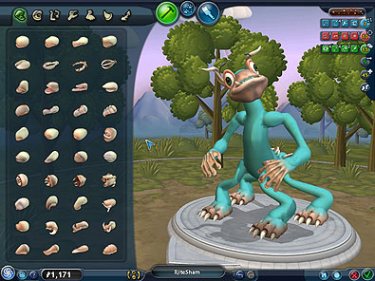 Electronic Arts announced today that the number of creatures created for its Spore game has passed 100 million.

That sounds wildly successful, and it certainly means that some fans love the fact that the game lets them create their own creature and then upload it to the Sporepedia web site. But the intense love that some users have for Spore doesn’t mean the game will be as successful as EA might have hoped.

EEDAR, a game market research firm, estimates that Spore sales have hit 2.8 million worldwide. The figure hits about 3.2 million if you count the Spore Creature Creator, a $10 game that includes only the creature creation function.

Still, Jesse Divnich, an analyst at EEDAR, says sales of Spore are definitely good enough to justify sequels and expansion packs. He also believes it has more legs than the typical retail title that comes and goes quickly. EA announced that it has such projects under way, such as Spore Galactic Adventures.

Wright said in a recent talk at the Web 2.0 Expo that he was happy with the sheer volume of user-generated content related to Spore. And while he said that hardcore gamers were disappointed with the game’s lack of depth, he was pleased that non-gamers and casual gamers liked it as something different.

In Spore, you can create your own microbe, creature, civilization, and space-faring race. Created over seven years, the game had some of the best hype in history, including a cover story in Wired magazine. Wright’s previous game, The Sims, sold more than 100 million units, counting expansion pack sales that upgraded the game with new content every six months or so. Wright recently left to start his own company, The Stupid Fun Club.