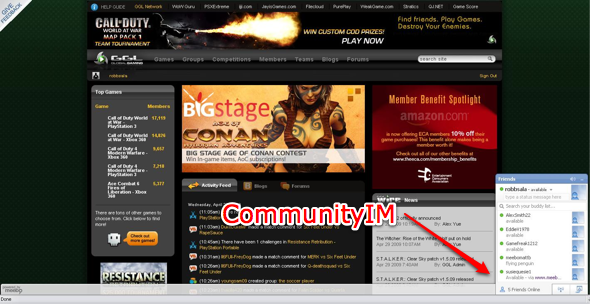 Meebo has been seeing some new users through its service for integrating instant messaging into other web sites, and it could start to make more money as a result. Seven or so partner web sites generated 4.5 million unique visitors in March, it says, but that number jumped to 10.3 million last month when the company integrated the service, called CommunityIM, on social network MyYearbook and other sites.

Mountain View, Calif.-based Meebo first got traction as a web site that let you chat with friends across IM services offered by AOL, Yahoo and Google. CommunityIM takes advantage of that: It’s a sort of toolbar that lets you chat with existing friends on a site, as well as your friends on IM networks that you’re already connected to through Meebo. At this point, the company has a total of 65 partner sites signed up for CommunityIM. Only 25 have gone live, and many haven’t been announced. These partners have around 120 million unique monthly users combined, according to comScore numbers. Meebo itself has some 47 million monthly active users on its home site, Meebo.com, as well as on its Rooms and Meebo Me widgets.

In terms of money, the company has already been running a sort of “engagement” advertisement on its home site — it’s a multimedia banner that can pop out to include video, surveys, or other information. Meebo has started running these ads on the CommunityIM toolbars, splitting advertising revenue with partners (so far, ads are just tests, though). On Meebo.com ads have an average of a one percent click-through rate, the company says, but when users expand ads, users spend an average of 1 minute and 35 seconds per ad. Ten percent of those who click send the ad on to a friend through a sharing feature that Meebo offers as part of its service.

The company isn’t saying how much its making on this service — and it’s not clear how much it will ever make — but the metrics at least point in the right direction.

Meebo could also start becoming more important to casual game players. Nine gaming sites have recently introduced Meebo, so members can chat with each other as they’re playing, reading and otherwise talking about games. One is Outspark, a new partner site with a few million users a month, with user gaming sessions that can range from 40 to 140 minutes. Like chat on Facebook and on other social networks with active game communities, Meebo chat could be another way that people share games with their friends — and see Meebo’s ads.