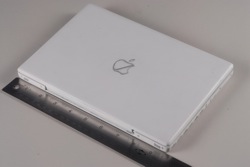 Is this the new Apple netbook? — Cult of Mac published an image from “a trusted contributor.” But no, it actually turned out to be a student-created wooden model. Oops.

RIM’s BlackBerry Curve unseats Apple’s iPhone in sales — One of the big drivers of this victory? An aggressive “buy one get one free” campaign by Verizon.

FTC looks at overlap of Apple and Google boards — The question is whether those ties reduce competition between the two tech giants and amount to an antitrust violation.

Emulex rejects Broadcom’s $764 million takeover bid — Chip-maker Broadcom had hoped to consolidate costs and get into the board business, but Emulex managers say the price was too low.

Real estate search startup Zillow sees a surge in traffic — Its workforce is growing too, with the company now employing 140 people, almost the level employed before it laid off 40 people last fall.

Is ownership passe? — TNL.net argues that services like Netflix and the iTunes music store mark a shift away from ownership and toward a rental society.

Twitter shuts down StatTweets, application for getting sports scores — Twitter says the app violated its terms of services. The biggest issue seems to be the creation of 650 accounts for tracking various teams.