Want to add live video to your website, but lack the resources to make it happen? Stickam, one of the many companies out there offering services to broadcast live video online, wants to help. It created an application programming interface for using the Los Angeles company’s technology to bring livestreaming to your site, and now it’s formally launching that API (which links one kind of software to another).

Basically, the StickamAPI is a relatively easy way to add live videos to sites, which could for example be used for marketing, education, social networking, or customer support. It includes features like chat, password protection, and an analytics tool to show customers what’s being watched and (since the videos can be embedded on other sites) where.

Now that the API is out of beta, Stickam is also ready to start charging. Companies pay for however much bandwidth they use, starting at a price of $0.45 per gigabyte, which breaks down to around $0.05 per viewer hour. That makes Stickam cost orders of magnitude less than competing services, says chief executive Steven Fruchter. 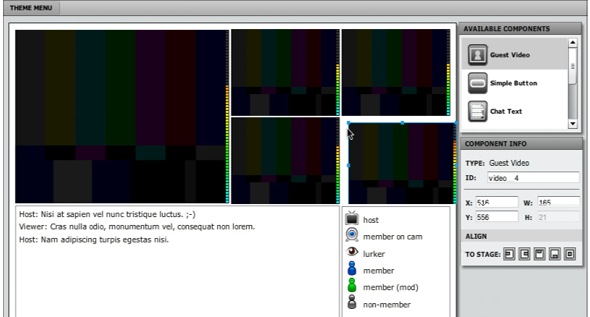 One of most promising features that Fruchster showed me was a “builder” to create a website’s video player. After all, if a site wants to run live video, not only does it need the underlying infrastructure to play the video, it also needs a player for user control, preferably one that’s customized with the company’s branding. Normally, you’d need to hire a Flash developer or have some expertise yourself to make this happen, but Stickam’s builder lets you just select different menu options and and drag different elements arund the screen, then voila — your very own video player. Los Angeles radio station KROQ (a mainstay of my LA childhood) used Stickam to build a video player and livestream a concert by The Killers, Fruchter says.

In its bid to become the engine underlying livestreaming across the web, Stickam is making a smart move that could help it tand out from the livestreaming competition. Fruchter says there are many smaller customers who, without Stickam, just wouldn’t have the time, expertise, or money to make live video happen on their sites.

“Smaller guys who might create real businesses can’t even start trying,” he says. “We want to open up livestreaming to the world.”