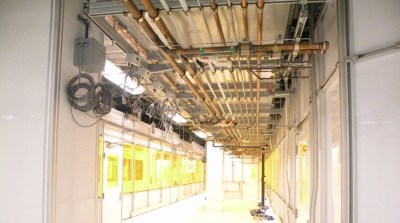 But that’s the record of University of California at Berkeley’s micro-fabrication engineering lab. Now a new lab with a new building and a new nano-fabrication facility — the Center for Information Technology Research in the Interest of Society — aims to create a foundation for future innovation that could keep Silicon Valley competitive with the rest of the world. 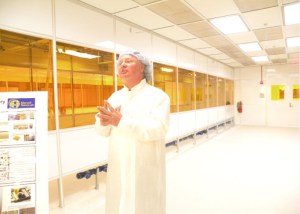 Built with a budget of $300 million over the last eight years, CITRIS will house Silicon Valley’s premiere fabrication research facility that, alongside Stanford’s own research labs, will be widely available to startups and big tech companies. The 15,000-square-feet nanofabrication facility will be specially valuable to startups working on semiconductors, new materials, biotechnology and nanotechnology.

But unlike places like Bell Labs that became known for doing research papers with little societal impact, CITRIS will focus on being practical goals of tackling society’s biggest problems.  The center will have 500 researchers and thousands of students rotating through it — an attempt to widen its impact beyond a small core of researchers.

Yesterday, it showed off some new projects, including a thermostat that detects when you’re home (by noting the WiFi signal of your phone, for example), a way to measure real-time traffic conditions via signals on cell phones, and transmitting health information wirelessly for remote populations in developing countries. 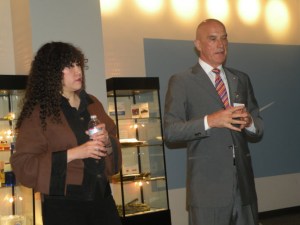 The lab’s 300 faculty members rotate through the lab and thousands of students — including undergraduates — have access to it. More than 60 companies are collaborating to keep the paths to project commercialization open. The center will also house law professors, public policy experts, and researchers focused on alleviating poverty in developing nations.

The CITRIS lab is housed in a new building funded in part by a $20 million donation from the founders of Marvell Technology Group — Sehat Sutardja, chief executive, his wife Weili Dai, co-founder (pictured left), and Sehat’s brother, Pantas Sutardja, chief technology officer. The nanofabrication facility comes with a clean room that has less than 100 specks of dust in a cubic foot of air. The wiring and plumbing is set up to be flexible, which is different from most corporate fabrication sites.

The chip equipment can be configured for a variety of applications, from nanotechnology to cleantech, in keeping with the goal of delivering “wafers, not papers,” a reference to the silicon wafers that are processed and sliced into chips. Bill Flounders, manager of the clean room, said that the lab’s equipment will be able to make circuits with a width of ten nanometers, or 1/10,00th the width of a human hair. Intel’s mainstay chips have circuits with a width of 45 nanometers.

Dai said her company would stay closely involved in the lab, which is next door to the building where she met her husband as a Berkeley student. Born in Shanghai, Dai came to the U.S. to study and became a software programmer. She co-founded Marvell with her husband, an Indonesian immigrant, in 1995. Now they have thousands of employees, including 500 researchers in Shanghai. She says that researchers have to create new technologies that are simple and smartly designed for everyday use.

Among the ideas being pursued are ways to read newspapers and magazines on electronic gadgets, like future generations of Amazon’s Kindle book reader, that can save trees. Dai said she was also looking forward to projects such as how to design computers that are even smaller than today’s netbooks, a popular category of web-browsing machines which are smaller than laptops.

This is the third time in the last 48 years that the fabrication facility has had a major makeover on campus. The first one was set up in 1961 and led to a flowering of startups such as Intel. The previous incarnation of the lab, built in 1982, spawned more than 76 high-tech startups. Paul Wright, director of CITRIS, said the lab and its building had been in the works since 2001, when the state dedicated $100 million in funding to Citris as long as industry gave $200 million. The funding came through. 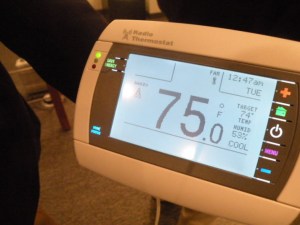 Tim Simon, chief executive of Hong Kong-based Golden Power, highlighted a project (left) where his company used Berkeley’s know-how to create a smart thermostat. The thermostat is easy to configure for a particular person’s tastes. It asks you, for instance, what time you get up so it can automate the activation of a heater or air conditioner to deliver comfort and use energy only when it matters. If a person is home, as indicated by a Wi-Fi connection to an iPhone, then the thermostat can adjust the temperature and humidity to that particular person’s comfort level.

Wright said that a recent Environmental Protection Agency report said that if power spikes can be reduced, California could avoid building five power plants from now to 2015. If that happens, the state could save $10 billion and it could take 9 million metric tons of carbon emissions from the air. That’s equivalent to taking 1.3 million Ford Tauruses off the road. 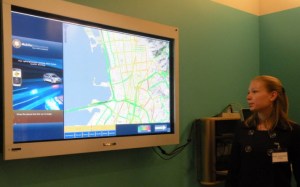 Another project in the works in the “intelligent infrastructure” domain is one I’ve seen before at Nokia Research. The Mobile Millennium project — being developed by researcher Alexandre Bayen and students Dan Work and Aude Hofleitner (right) — is aimed at building real-time traffic information on a map displayed on a cell phone so that drivers can avoid areas where the traffic is bogged down. The project was started in August, 2007, and has made a lot of progress in that time.

So far, more than 4,000 people have signed up at traffic.berkeley.edu to download an application onto their global positioning system (GPS)-enabled cell phones. The phones then broadcast their locations while drivers are on the road, helping to enhance other publicly available data about traffic. So far, major tests of the system show that it improves the accuracy of traffic information and gets better with more drivers. 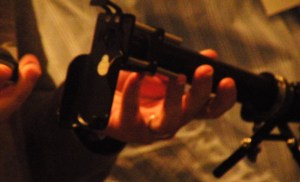 Work said that the individual car data is kept anonymous to protect the privacy of all drivers. The partners include Nokia, Navteq, the California Department of Transportation and the federal transportation agency. Work said that he is trying to get more data from public sources, such as GPS systems in buses and taxis.

And another project in the electronic health was Cellscope (left), which is a microscope that can broadcast its images to labs from remote destinations. Robi Maamari and researcher Daniel Fletcher created a microscope for use in the field to examine blood samples from villagers so that they could catch outbreaks of malaria or tuberculosis. When attached to a camera phone, the microscope (pictured) can transmit the image wirelessly to a lab, where the results can be examined. Maamari took it to the Congo to do research last year. The data can be tagged with geographic data to track an outbreak. Clearly, the events of the last few weeks with the swine flu show that this could be useful. For more articles on Citris’s projects, go here.