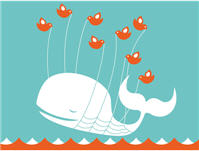 Now that the Apple-buying-Twitter rumor is cold, it’s time to ask not who’ll buy Twitter, but why on Earth would it sell? There are three good reasons for founders Jack Dorsey, Ev Williams and Biz Stone to relax till the tech sector comes back.

First, the rumors that Twitter spends a fortune on outbound SMS fees doesn’t match the reality: When was the last time you saw anyone texting 40404 instead of using Twitteriffic? Second, the company has wisely refused to spend its own money to bring ancillary services in-house. URL shortening, file hosting, and advanced functions like user groups are left to the cloud and the crowd. But most important: Twitter has managed to make downtime a part of its charm. Who doesn’t love the Fail Whale? IT managers know that as you try to improve the reliability of a service, costs climb much faster than uptime.

Add it all up, and Twitter doesn’t need much money to get through the current slump. I’m willing to bet the founders are more worried about Twitter being abandoned by a buyer, like Google did to Dodgeball. Or even worse for Web 2.0 scenesters, the wrong buyer could inflict permanent brand damage on their baby. No one remembers now that once upon a time, Hotmail was way cool.