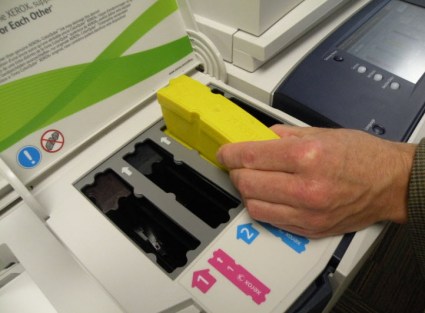 Xerox is launching a new version of its high-end multifunction copiers that use solid blocks of ink — a cheaper and greener printing solution than ink toner.

The new ColorQube 9200 multifunction copiers are different in that they melt solid blocks of ink that don’t have to be housed in costly and wasteful cartridges. Xerox claims the machines cut printing costs by 62 percent and eliminate 90 percent of the waste of similar copiers.

These $23,500 machines are the heavy-duty hallway copier/printers that corporations pay for on a monthly basis — a business which is heart and center of Xerox’s corporate focus. If Xerox can pump new life into this business with solid ink, it will live up to its long-term goal of being an innovator in copiers. And this solution is so clever it just might make its way into every part of the printing business — including the laser printers or inkjets in offices and homes. 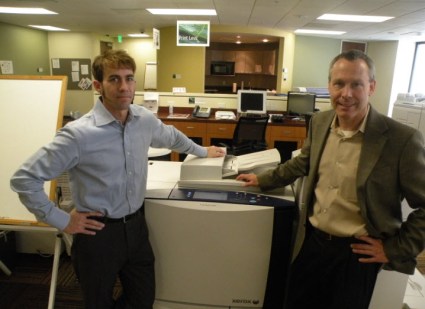 The technology dates as far back as 1991, and we wrote about it last year after our visit to Xerox’s Palo Alto Research Center. Xerox hasn’t been extremely aggressive with solid ink, using it in a couple of desktop printers until now. But now the copier giant says it can move the technology upscale to its main business of big office copiers.

The machines use four kinds of ink and you can load six chunks of solid ink into them. It printer has a print head that substantially increases the flow of ink by packing 900 ink nozzles into a print head, with four print heads per printer. Each nozzle is only 37.5 microns wide, smaller than the typical 100-micron width of a human hair. All told, there are 3,000 print heads per printer, allowing it to put more ink drops on a page in a minute than there are people on earth.

The ColorQube 9200 machines can print 85 pages per minute. That speed is a breakthrough in performance and it’s one of the reasons Xerox spent so much time on the project, said Steve Korol, (above, left) manager of the advanced development group in Wilsonville, Ore. His group spent five years developing the machine and building the business. One of the things it had to do was build a $24 million solid-ink factory in Oregon.

The ink is a solid block at room temperature. The printer melts the ink and then jets it onto a drum. The drum rolls around once before printing an image on paper. The ink, a polymeric resin, feels like crayon to the touch. The process is analogous to offset printing, which is used to create newspapers and magazines. There is no water to dry or solvent to evaporate, making it cheaper to use, and far more eco-friendly. A single block of ink can be used to print 9,250 pages.

The printer uses sensors and image processing algorithms to calibrate the image before it is printed. It also cuts energy use by 10 percent by powering down the device when it’s not in use. A patented vacuum system, only 17 thousandths of an inch wide, removes tiny paper dust particles.

Vendors sell these machines to corporations for a one-time fee, plus printing costs. Xerox is charging about the same price as many others on the market. But the initial price is typically only part of the cost of a machine like this. On monthly basis, vendors also charge extra fees on a per page basis. For heavy color pages, Xerox will charge 8 cents a page. For light color, it will be more like a penny a page, which is the typical price for black and white copies. Rise says that’s cheaper than rivals.

It will be interesting to see if Xerox’s solid-ink printers can help Xerox gain market share in multifunction copiers. But I’d also like to see if it can shake up Hewlett-Packard’s printing empire in laser printers and inkjet printers. Xerox has shown a prototype of a solid-ink printer that could challenge the highest end offset printing presses. That represents a push into the high end. But everyday consumers ought to be able to choose this environmentally friendly technology. Still, it’s nice to see innovation in the old-fashioned imaging market, where outsiders such as Zink Imaging have stirred things up with inkless printers.

Xerox needs this printer to help the bottom line. The Norwalk, Conn., company lowered its targets for net income for the fiscal year, predicting it would have net income of 50 cents to 55 cents a share. That is half of last year’s $1.10 per share net income.

But Xerox is still profitable. In the first quarter, it reported net income of $42 million, or five cents a share. That’s pretty good compared with last year’s loss of $235 million, or 27 cents a share (a lawsuit settlement hurt earnings a year ago). Revenue was $3.55 billion, down from $4.34 billion.