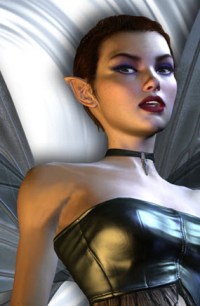 Nvidia, which makes graphics chips that go into all kinds of electronic devices, and therefore a good barometer for the tech industry, says its market is stabilizing.

The Santa Clara, Calif. company reported improved financials for its first fiscal quarter ended April 26. Revenue was $664.2 million, down 42 percent from $1.2 billion a year earlier. But sales were up 38 percent from the fourth fiscal quarter.

Along with Intel, Nvidia’s results are closely watched. Its better performance — such as a reduction in its inventories of chips — provides more evidence that, as Intel said earlier, the tech industry is hitting bottom and is poised for a recovery.

Graphics chips were 53 percent of sales and were up 44 percent from the prior quarter. In anticipation of launching new products, the company said its costs related to a new form of manufacturing, 40 nanometers, were rising. Nvidia hasn’t yet announced a new generation of graphics chips that will use the 40nm technology. But the cost increase is a clue that the new chips are coming.

Jen-Hsun Huang, chief executive, said the company made progress reducing expenses and inventory. One sign of recovery, or hitting the bottom of the free fall: customers started buying again, and Nvidia’s inventory fell from 144 days to 64 days.

The company said its share of desktop graphics chips grew to 69 percent from 63 percent, according to Mercury Research. Huang said he believed average selling prices for graphics chips went up in the quarter, since Nvidia gained market share in high-end graphics chips that cost more.

The company finally got its Ion platform — which includes a graphics chip for handheld devices — off the ground as Acer adopted it for its AspireRevo desktop system. More Ion-based platforms are coming in the months ahead from almost every computer maker, Huang said.

Nvidia is also selling its new chip for cell phones, the Tegra. Huang said the chip is being designed into smart phones, netbooks, and media players. The company has been investing in Tegra for four years, with a team of 500 people on it. The chip, which consumes less than a watt, is aimed at the biggest market opportunity: portable devices. The company has more than 5,000 employees and is in a hiring freeze in the U.S.

Nvidia is constantly at war with Intel, which sells low-end graphics devices that combine a chip set with graphics. Huang said the upcoming Windows 7 has features — which make use of DX Compute — that demand better graphics performance than integrated graphics chip sets can provide.