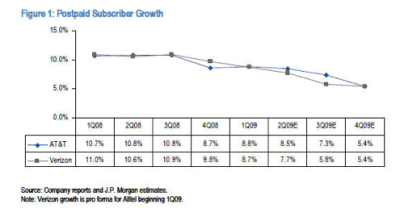 Carriers like AT&T and Verizon are facing weaker growth in wireless subscribers than they have in the last five years, and costs of their data network are going up as revenue growth starts to taper off. That’s why J.P. Morgan analyst Mike McCormack, who sees “deteriorating wireless fundamentals,” downgraded the two companies yesterday. We just reported yesterday how T-Mobile is seeing slower activity.

This slowdown is forcing carriers to consider doing the inevitable: Keep pricing low for basic users, but increase pricing substantially for customers who use too much data — or simply cut off users who abuse the data plans. In other words, get ready to say goodbye to wireless net neutrality. The chart below (sorry, you’ll have to squint) is from a presentation by Shen Donglin, VP, Mobility ZTE Corporation, at this year’s Mobile World Congress in Barcelona. It illustrates how the industry could look like over the next few years: While mobile traffic explodes, carrier revenue barely grows. Consequently, carriers just can’t cover the costs of all these customers using all these great applications on their smart phones. So they’ve got to either offload the traffic to someone else, or they’ve got to cut costs. Really, it boils down to the simple business equation: Profit = Sales – Costs. 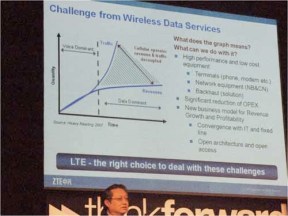 Already, you’ve seen AT&T revise its terms of service on some of its new netbooks, prohibiting things like “downloading movies using P2P file-sharing services, customer-initiated redirection of television or other video or audio signals via any technology from a fixed location to a mobile device, Web broadcasting, and/or for the operation of servers, telemetry devices and/or Supervisory Control and Data Acquisition devices.” It means you may no longer be allowed to stream content from third-party Web sites, such as You Tube, or via applications like Slingbox.

Subscriber growth for AT&T and Verizon has fallen below 10 percent for the first time in five years, to 8.8 percent and 8.7 percent.

While smartphone demand was still growing in the very challenging first quarter, McCormack said carriers will have to subsidize their plans to keep smartphone growth sales humming. Indeed, AT&T is considering cutting the iPhone’s monthly service plan by $10 when Apple introduces the newest version of the smartphone next month, according to Cote Collaborative analyst Michael Cote. He said there’s a “strong possibility” AT&T will cut the iPhone’s entry-level data service plan from $69 per month to $59, reducing the total cost of a two-year contract by $240.

Verizon, which has been shut out from selling the iPhone is also prowling for cool smartphones to sell. We reported earlier that it was courting Android, and indeed we’re seeing new reports that Verizon will launch an Android phone with Motorola. It’s true, this is a growing market, but no one knows how big it will get. In this market, as McCormack also noted, households are looking for cheaper options, including pre-paid (or pay-as-you-go) plans. Increasingly, what once looked like an open prairie of opportunity — endless versions of smartphones leading to endless growth — is now looking more unrealistic.

We’ll be writing more on the net neutrality issue in the coming days.