Developers may be making tens of millions of dollars through games and virtual goods on Facebook‘s platform, but the social network itself hasn’t had a way to get a share of that money. This may be about to change, as it plans to begin testing a payments system with developers in several weeks, according to industry sources. This product has been described to me as involving some sort of system that can use real money. A source close to Facebook confirms the timeline for the test, saying that it will be a “small, alpha test” and adding that details of what the test product will include are still being worked out.

It could end up being pretty big. Facebook could potentially offer a universal currency for Facebook applications, as well as other sites on the web that use Facebook data, making a single trusted payment method that users and developers would feel comfortable using for anything from virtual goods purchases to actual products. This could benefit developers, as Facebook users would only have to enter payment information a single time (when they give it to Facebook), making a purchase a matter of just a single click (like how buying a song on iTunes works, for example). Facebook, in turn, could take a cut of every transaction. 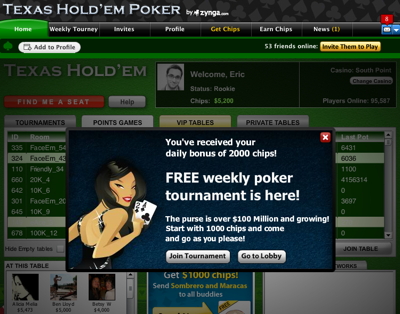 Getting even a fraction the revenue of the virtual goods market on the platform could make a significant impact on the company’s financial numbers. A number of leading companies on the platform have previously estimated that developers could gross up to $500 million revenue, mostly from virtual goods built into a wide range of games. These games range from virtual poker applications like Texas Hold ‘Em to quizzes like Who Has a Bigger Brain and mafia role-playing games like Mob Wars. Of course, Facebook itself could be making up to that amount this year, based on a revenue run-rate that it disclosed in April — but that’s mostly from advertising.

Facebook hasn’t seemed focused on offering anything like a payments systems, beyond a virtual gifts store that it launched in February of 2007. It did say that it was looking at offering a payments system for developers, when it launched its developer platform that May. And, at the end of that year, it began asking for input from developers. In 2008, the company hasn’t done much on this front, or so it has seemed — one source tells me that the project has never died, based on conversations with Facebook engineers. Meanwhile, beginning early last year, developers began to see their virtual goods revenues rise. This year, sources say, third-party virtual currency providers including Jambool and Twofish have talked to Facebook about working with it on its current effort.

Those old plans are coming to life

Jambool could be a potential partner, as it has put off a planned funding round while it finalizes a deal with a “major social network,” according to one source.

And, intriguingly, Facebook put an experimental form of virtual currency into testing last month. Called “credits,” the product let users give these virtual points to each other for things such as shared items that they particularly enjoyed. Credits were also tied into the gift store: You use credits to buy virtual gifts, and you could buy more credits (if your friends weren’t already giving you many).

What’s not clear is how credits might fit into the test rolling out to developers in a few weeks. I’ve also been hearing rumors that the credits test is going to be killed — Facebook denied this when I asked — so perhaps credits will become something more than it is now.

Meanwhile, other social networks have been getting into the action. Hi5 rolled out its own currency last December. MySpace has also been looking at a sort of payments system for virtual goods, but hasn’t come out with anything yet. However, I’ve recently heard that it also has something big planned on that front for the near future. What’s also not clear is how whatever Facebook offers for developers will compete with the range of the range of payment options that are already in use on the platform, including those from PayPal, Zong, Mobillcash and others.

Still, a single virtual currency has been a top feature request of developers ever since the platform launched. Facebook, like its rivals, appears to be making the right move.