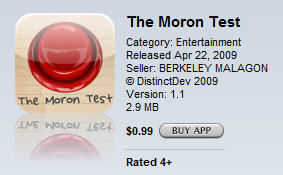 Apple brags that more than a billion iPhone applications have been downloaded so far from its App Store, a successful online store of instantly installable iPhone software. But how much money has the App Store made for Apple?

The store, which offers both free and paid for-sale apps, nets Apple a 30 percent cut of all sales. Typical app prices run from 99 cents to $2.99, with a few priced higher.

Silicon Valley venture capitalist Jeremy Liew, an insider on technology business deals, has good reason to doubt industry analysts and Apple’s publicists on the success — or not — of the App Store. Liew number-crunched some public statistics and crafted an estimate .

Liew began with a survey conducted by tech book publisher O’Reilly in Sebastopol, Calif. "O’Reilly did a survey of iPhone apps and noted that the mean price for paid apps is $2.65," Liew wrote. "Multiplying this by 25-50 million paid apps, that suggests that the cumulative revenue from iPhone apps is around $70-$160 million. Apple gets 30% of this, so Apple has probably made around $20-45 million from the billion iPhone apps downloaded. It took six months to hit 500 million app downloads, and only three months for the next 500m app downloads, so Apple’s revenue run rate is higher than this."

To many companies, $20 million would be reason to break out the champagne. But Liew put the figure into context for Apple, which collected nearly $5 billion in revenue last year, much of it from $400 iPhones (The company has since cut the entry level price to $199.) "Given that Apple sold 13.7 million iPhones in 2008," Liew concluded, "the App store is not a meaningful direct contributor to their overall revenue. Much like iTunes, Apple is using the App Store to drive demand for their hardware."