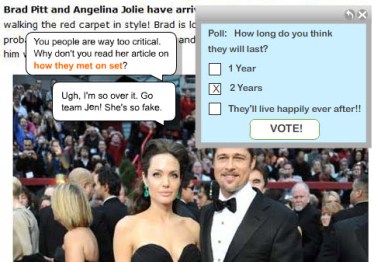 RocketOn is one of the companies devoted to the parallel web, meaning it can take web sites and layer things on top of them, from virtual characters to message boards.

Today, the company announced a new web application, Blerp , that branches out from its previous platform, which was more like a virtual world on top of the web. With RocketOn’s first platform, you could create a character and literally walk around on other web sites. Others who did the same thing could see your character and interact with it.

With Blerp, it is introducing a widget that layers on top of existing web sites. The idea is to "layer the web" with more content on top of what’s already on a web site. Rivals like Fleck do the same thing. Blerp creates a sidebar with a header in a corner of a page where you can post text, videos, photos and other things.

Blerp users can take polls, rate sites and share with others. You can leave notes, like graffiti that only fellow Blerp users can see. And you can take Flickr photos or YouTube videos and stick them on somebody else’s web site. Blerp essentially liberates web content so you can stick it anywhere, said Steve Hoffman, chief executive, in an interview.

Hoffman believes users are going to take to Blerp because it makes sense to do "layer surfing ," or cruising through web sites looking for messages from like-minded people. This takes the control of the web sites away from the owner and shares it with users.

The Amazon.com of the future, Hoffman says, might only be 20 percent Amazon and 80 percent user-created layers. The base site is merely the anchor for the discussion. This reminds me of the Harry Potter books and the Hogwart’s Express train, which only magical students could see on the train platform.

The South San Francisco company has raised $5.8 million in venture funding in its two years of existence. It has 12 employees and contractors. Hoffman said he plans to keep growth manageable during the recession and has enough funds to last through 2011. RocketOn’s first platform has 130,000 users so far, a pretty small number considering it debuted last year. About a quarter of those are active.

But Hoffman said the company plans to start marketing the platform on various media sites soon to generate more usage. Blerp requires no download or plug-in. You simply visit the Blerp web site, where you can click on a discussion, and then you’re transported to the site being discussed.

Hoffman thinks he can charge companies for Blerp, particularly if they set up private Blerp forums where employees can discuss features on a web site that other visitors won’t be able to see. RocketOn was one of the finalists at our GamesBeat 09 conference in March.