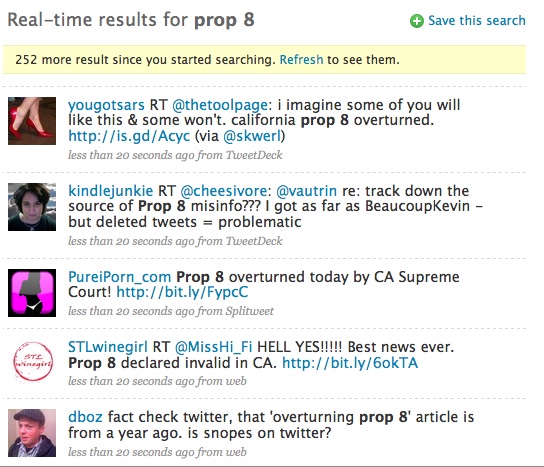 This just in from Twitter — California’s Prop. 8, which amended the state constitution to ban gay marriage, has been overturned by the state Supreme Court. Since I’m a typical San Francisco liberal, you can probably guess how I reacted. To paraphrase some of the comments on Twitter: We won!

Except, oh wait, we didn’t. Everyone tweeting about gay marriage’s victory failed to look at the time stamp on the article being linked to, or only saw the date, not the year. In fact, it’s an article from May 2008, and it covers the Supreme Court’s overturning of an early anti-gay marriage proposition — in other words, it’s about the court decision that led to Prop. 8 being put on the ballot. Oops.

Meanwhile, back in the real world, the Supreme Court still hasn’t reached a decision on whether the proposition was constitutional. And the rest of us are left to marvel at this example of the real-time web in action. Right now, there are still hundreds of tweets popping up every few minutes, some of them spreading the incorrect info about the proposition being overturned, some trying to correct things, others wondering how this all started.

Update: Looks like this isn’t just the story of new media misinformation, but of an old media screwup, too. It looks like a tweet from the Los Angeles Times helped spread the rumor (as implied in the tweet below), although apparently someone else started it. Danny Sullivan has more details. 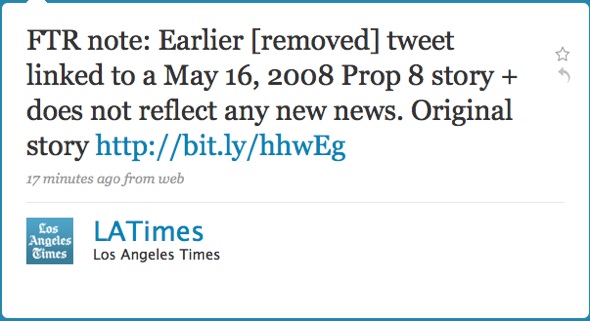