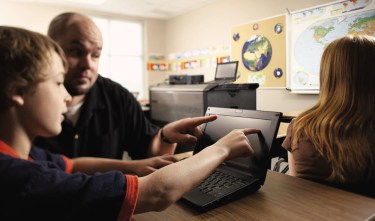 Netbook computers for web browsing and emailing are taking off like wildfire, and now Dell has thrown its hat in the ring with a netbook for students.

The new Dell Latitude 2100 has a 10.1-inch screen and a touch-screen surface designed for student-teacher interaction. The netbook is rugged and come in five colors. It has wireless Internet and a built-in webcam. It even has an anti-microbial keyboard to account for the fact that many students might use the same machine and otherwise spread germs with it. It’s another example of how innovation in the computer market has moved to the smallest and cheapest machines. 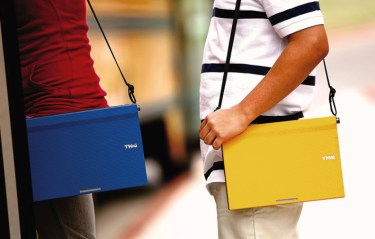 While HP targeted college students last year with its HP Mini netbook, Dell is going after K-12 students with its new machine, which sells for $369 (with Linux) or as much as $450 with (Windows Vista Home or Windows XP Home). It also has an option for a cart to charge and store a bunch of netbooks in a classroom. Just a year ago, the HP machine cost $599. Prices are obviously coming down fast.

The company has launched other netbooks for road warriors, but the netbook market is expanding quickly. Dell has to act fast to hang on to market share. Acer said it has shipped more than 1.9 million netbooks. The latest Dell machine uses an Intel N270 Atom processor and an Intel integrated graphics chip set. The machine weighs 2.9 pounds and gets as much as seven hours of battery life with a six-cell battery.

It’s interesting that companies like Dell are now so focused on netbooks that they’re dedicating their limited design resources to carving up different segments of the netbook market, which is really only about 18 months old.

David Lord, a product manager at Dell, said the company believes netbooks are increasing the size of the overall computer market rather than cannibalizing it as critics have said. Asus introduced the first successful netbook, the EeePC, in 2007. By late 2008, netbooks had sold 30 times more units than they did in 2007. An estimated 35 million are expected to sell in 2009, according to ABI Research.