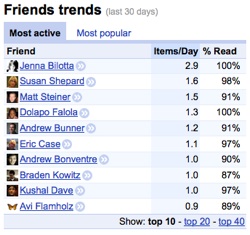 Google just released a new version of Google Reader, its service for subscribing to and reading RSS feeds. Most of the new features announced (such as the ability to add notes in the mobile version of Reader) amount to nice little tweaks, but the biggest addition, a chart of “Friends trends,” is worth pointing out for being kind of cool and kind of weird.

The chart presents details about your friends in Google Reader — how many articles they share per day, and how many of those you read on average. It looks like the Reader team is continuing its efforts to make the service more social (for example, it added comments a couple of months ago), but in a particularly Google-y way, with numbers rather than improved interactions. I guess it’s fun in a navel-gazing way to see whose articles you read, but is it useful? If there’s someone who posts a ton of articles that you always ignore, you’ve probably figured that out already.

Taking another look at the Trends area also reminds me how rarely I use the social features in Reader. My friends either share (much) less than an article a day, or I read only a small percentage of the articles they share, or both. There are just so many other places to share and start conversations about the articles I find in Reader, such as microblogging service Twitter. I suppose that might change over time, since the social features are relatively new. Meanwhile, I’m still waiting for Google to do some more powerful with its Reader data — namely, create a “most shared” area.