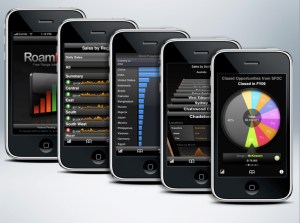 It’s now a given that many sales people, bizdev managers, and other road warriors want to use their iPhones for work, rather than toting a company-issued handset they don’t truly love. Many are leaving their laptops behind, using the iPhone as a pocket Mac.  But how do you look at spreadsheets on an iPhone’s smaller screen?

RoamBi is an iPhone app that includes four new ways of displaying complex data in a simplified, easy-to-parse, prettier-than-Excel format designed exclusively for the iPhone’s touchscreen. The website for RoamBi features a large Flash demo of the app’s display widgets. Smart data presentation makes it easy to see, for example, which sales leads are the biggest, or how a budget is being divided among several line items. RoamBi can handle and display data from Oracle, Salesforce.com, and several other data applications popular with large firms.

The app is sold by startup Mellmo, a San Diego-based company founded in January 2008. Chairman Santiago Becerra has a history of building information visualization software. His past companies include Infommersion, maker of Xcelsius dashboard software,  and Graphical Information Inc., acquired by Oracle in 1998. The company is privately funded.