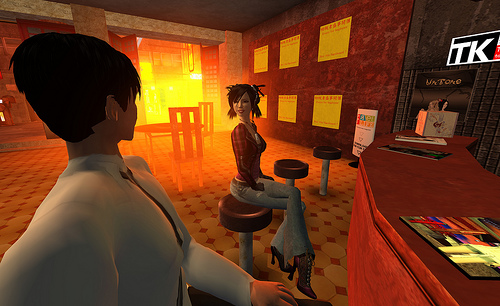 When you think of phone companies, Linden Lab‘s Second Life virtual world doesn’t come to mind. But the company is announcing today that its users have used its web-voice calling feature to talk to each other for a  total of 15 billion minutes since it was introduced 18 months ago.

The voice-over-Internet-protocol web calling service inside the virtual world is now being used at a rate of 1 billion minutes per month, said Mark Kingdon, chief executive of Linden Lab in San Francisco. By comparison, the VOIP service Skype has been used for 200 billion minutes in the past six years. At any given moment, 50,000 Second Life residents are using the voice application.

“Voice is one of the crown jewels of Second Life,” said Kingdon, who joined Linden Lab as CEO about a year ago.

So far, all of the calls have been free of charge. But Kingdon said Linden Lab now has a plan to offer premium voice services in Second Life in the future as part of an overall plan to improve monetization. Kingdon said Second Life residents will be able to receive real world calls in the virtual world in a service dubbed AvaLine. The company’s Dial an Avatar function assigns residents of Second Life a phone number that enables friends to call from a landline, cell phone, or VOIP application. The service is available as a beta test today and will launch formally by the end of the second quarter.

In the second half of the year, Linden Lab will also add the ability for residents of Second Life to morph their voices. They can disguise their voices or make them sound comical. Users can make their voices sound like a “French woman” or a “sports announcer” among other voices.

Users will also be able to send text messages from inside Second Life to mobile phones outside the world. And users will also be able to record the VOIP conversations they have in the world. Lastly, by 2010, the company will launch the ability to have group chats in the virtual world. The services will cost money, but Kingdon said the company isn’t ready to announce rates yet. As for live video conferencing, that isn’t coming soon.

More than 50 percent of the company’s 700,000-plus unique users are using the built-in voice chat function in the virtual world. The voice technology is 3-D proximity based, meaning users can hear sound coming from certain directions inside the virtual world.

A bunch of companies are among the heavy users of voice in Second Life. Accounting firm Ernst & Young trains auditors in Second Life, while tire maker Michelin uses Second Life to train its enterprise architecture team, and Language Labs teaches English as a second language.