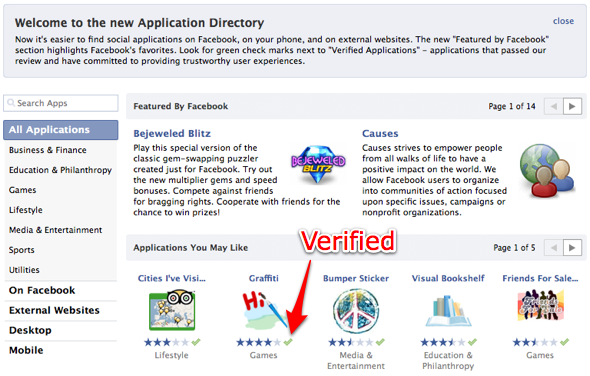 Having redesigned nearly every other part of its site in the last couple months, Facebook has now redesigned its directory of third-party applications and launched the new interface today.

It features Facebook employee’s own favorite applications, as well as “Apps You May Like” — apps that have been “verified” as being high-quality by Facebook through a special, long-awaited program. The new directory also has a section where you can see a reverse-chronological stream listing the apps that your friends have used most recently. There’s also a way to view apps that exist on other sites, the iPhone or your desktop (these are only Facebook apps in the sense that they integrate with Facebook user data; they don’t otherwise live on Facebook).

Verified apps are designated by a green check-mark in the “Apps You May Like” section, and also show user ratings. As Facebook has promised, these apps are now getting more visibility than their unverified rivals.

All in all, the app directory is a cleaner interface that should help users find applications they’ll like more quickly than before. The old directory just showed you a bunch of categories of applications (Games, Sports, etc.) but you could only sort by a couple categories, like most popular and recently popular.

And yet, there’s a larger issue, one that others and myself have been harping on since Facebook’s homepage redesign in March. That’s when Facebook removed a window that showed people’s favorite applications in the upper right-hand portion of its homepage. Since then, you’ve only been able to find applications, including Facebook’s own like Events and Notes, in the lower left-hand portion of its bottom toolbar. I still have to explain to friends how to find even basic applications — like Events — in this interface. Given that the main way to access the new directory is the “Browse More Applications” link in the applications window within the toolbar, I have to wonder how many users are going to see it any time soon. But hey, what do I know? Facebook has stuck with the application toolbar interface so it must be working for most people.