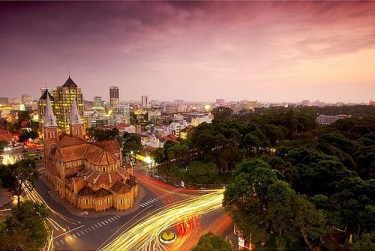 IBM is announcing today that it’s stepping up its investment in Vietnam as part of a bid to improve the country’s innovation and grab a foothold in an emerging territory for technology consumption.

That’s a big step for a country that a generation ago was shattered by war and that developed slowly under communist rule for many years. The U.S. lifted a trade embargo during the Clinton administration, and Intel decided to invest $1 billion in a chip assembly factory in 2006.

Big Blue is opening up an innovation center to help startups and local businesses develop and market new technologies. IBM will also develop relationships with Vietnamese universities and conduct joint research with them in areas such as analytics and cloud computing. Full told, IBM has 300 employees in Vietnam. But it expects that number will grow. The new innovation center itself has 12 employees.

Drew Clark, head of strategy for the IBM Venture Capital Group, said Vietnam can move forward faster on technologies such as broadband wireless because it doesn’t have the wired infrastructure that other countries do.

He estimates that a couple of venture funds, DFJ VinaCapital and IDG Ventures Vietnam, have invested in a couple of dozen tech companies in Vietnam to date. DFJ VinaCapital set up a $50 million fund to invest in tech companies in Vietnam in 2006. Startups range from Web 2.0 startups to online game companies. IBM wants to see the numbers of active VCs increase.

“It’s important that we’re not out there alone,” Clark said.

Despite a global decline in venture investments, IBM believes there are still pockets of innovation in regions such as China, Brazil, India, South Africa, and now Vietnam. Some of the ideas being explored in new territories include smart grids, electronic healthcare and greener data centers.

Vietnam will thus be getting some of the billion dollars that IBM is investing this year with its various technology partners. Earlier this week, IBM started a radio frequency identification (RFID) project to track seafood as it makes its way to restaurants worldwide.

IBM has had a presence in the country since the 1930s and established a sales office in 1994. The new IBM innovation center will be in Ho Chi Minh City and it will help companies throughout Vietnam, Cambodia and Laos as they take advantage of new technologies such as cloud computing and analytics. The company is targeting banks, telecommunications firms, energy companies, and government. Since 2000, IBM has launched innovation centers in a dozen developing countries. And in the past 10 years, it has invested more than $600 million in 43 innovation centers worldwide.

IBM is also allying with the University of Technology in Ho Chi Minh City and the College of Technology in Hanoi, with a focus on cloud computing and service science research. And it will also develop a local language version of its developerWorks technical resource site.

Big Blue will also develop a network with venture capitalists to boost investments and entrepreneurship around key technology trends. It said it has more than 200 business partners in Vietnam, double the number a year ago.

The strategy helps IBM get a key foothold in what will eventually become important markets. In Brazil, more than half of the country’s 2,000 software companies have become IBM partners. In India, IBM has 25,000 partners across 200 cities. In China, it has registered 11,000 business partners this year.