The city of San Francisco has launched a revolutionary online mapping project, called the Urban EcoMap, that tracks the amount of greenhouse gas emissions produced by its various neighborhoods — and beyond that, what has produced them: transportation, energy use or waste. Basically, it’s borrowing the concept of environmental contests run on college campuses to encourage students to be more eco-friendly — only on a metropolitan scale. 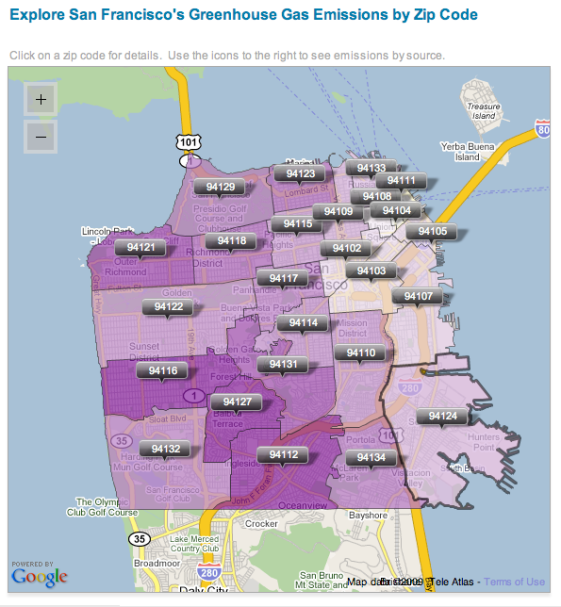 Announced by mayor Gavin Newsom on Earth Day last month, the site is finally up and running. The core of the tool is its map, broken up by zip code, which allows you to click to view emissions data for your particular region. For example, I live in the Lower Haight, which, according to its profile, produces 44,000 pounds of CO2 for each of its roughly 18,000 households every year, slightly above the city’s average. Alternatively, the Russian Hill area where fewer people drive only produces 27,333 pounds of CO2 per household every year — 37,708 pounds per household for the Mission District. The Outer Richmond produces the most by far: 56,849 pounds — 83 percent from transportation.

You can separate out transportation, energy and waste to turn the map (provided by Google, of course) into a heatmap showing which zip codes produce the most emissions from these sources. The overall goal of the project is to call bad habits to residents’ attention — ambitiously lowering the city’s 1990 average for emissions by 20 percent, effectively making the city greener than even the Kyoto Protocol requires.

This is a pretty lofty goal for the website, which serves a very narrow audience. In addition to the mapping tool, it provides copious recommendations and goal-setting resources for reducing your carbon footprint. But the San Franciscans who bother to check the site regularly, much less use it to change their behavior, are probably already aware of the issues and the actions that need to be taken. Not that there’s anything wrong with the preaching — the interface is clean and surprisingly informative — but the city needs to work on expanding its choir before an effort like the EcoMap will make a real difference.

The project is the brainchild of the city and Cisco Systems’ strategic consulting arm. While San Francisco is the first to launch the tool, the company hopes that other major metro areas will follow its example.