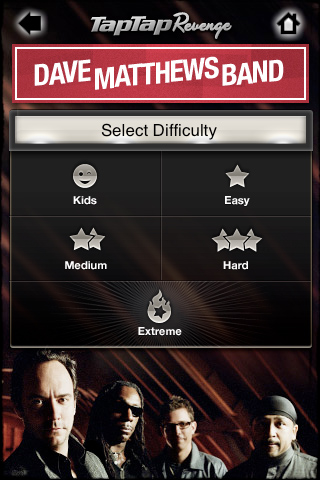 It’s time to get out your tapping finger again, as Tapulous has just released Tap Tap Revenge Dave Matthews Band game for the iPhone.

You may not care about this game. But there are a ton of iPhone users who probably do. And it’s interesting to watch Tapulous and how it manages the iPhone’s first bonafide mega-hit entertainment property. The company has a killer game on its hands, and it’s milking it for all it’s worth, releasing a new version just about every month.

The Dave Matthews Band version is the latest in a series that is turning into a franchise on the fledgling iPhone platform. It just launched for $4.99 on the AppStore. This is the fifth paid version in the series.

The games are sort of like Dance Dance Revolution or Guitar Hero for the iPhone. They make use of the touch screen and the accelerometers which respond to shaking.

So far, hundreds of thousands of paid versions have been sold in the series, said Bart Decrem, chief executive of the Palo Alto, Calif, company.

“The goal is to give people new versions with the music they love,” Decrem said in an interview.

Tap Tap Revenge was released way back in July 2008. That’s ancient by iPhone standards. Tap Tap Revenge 2, meanwhile, ranks No. 27. Roughly a third of all iPhone users have it, more than any other app, according to comScore.

Decrem credits the community networking features of the game for its lasting power. Decrem says the top player plays the game more than 2.5 hours a day.