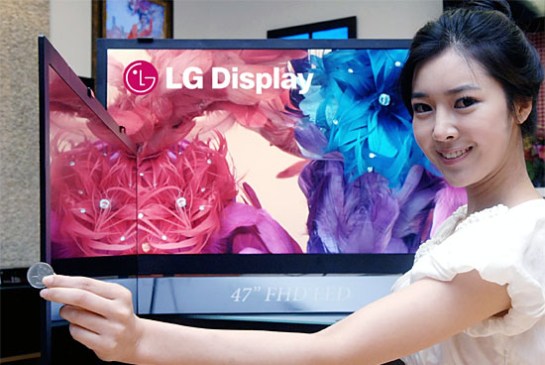 With Samsung leading the charge, several television makers are turning to light-emitting diode technology to build thinner, crisper and more energy efficient products, VentureWire points out today. The catch is that the LEDs take price tags up a few notches — so will consumers go for it?

So far, the strategy employed by Samsung, LG and Sony — which all have LED models of their own on the market — has been to emphasize energy savings. Retailers tell their customers that the TVs use 40 percent less energy than older models, which rely on cold cathode fluorescent lamps for backlighting. Paired with price promotions, the technology could eventually pay for itself, the companies say. Whether or not this will convince buyers to spend an extra $1,000 upfront remains to be seen. Sony’s 46inch LED TV costs $3,999.99 compared to $2,999.99 for the same size CCFL model. Similarly, Samsung’s 46-inch sells for $3,299.99, $900 more than the CCFL version.

For now, the LED models are considered premium products and fewer have been rolled out. The companies are aware that a recession might not be the best time to launch expensive products on a wider scale, but they predict prices to come down as the technology develops. Since it launched its LED line six weeks ago, Samsung has sold 20,000 — impressive, but a drop in the bucket compared to the 26 million LCD TVs it moves every year. About 1.5 percent of TV sales are LED, reports DisplaySearch, but that figure should rise to 8.3 percent in the next two years.

An interesting aside: marketing campaigns for the LED models have brought electronics giants LG and Samsung to blows recently — with the latter complaining to the Korea Broadcaster Association that its rival was slandering its product in television ads. It’s a strange turn of events, considering the KBA has no formal power to do anything about the problem, even if it found the complaint valid.

The slow-moving trend toward LED TVs is one of several factors boosting the light-emitting diode market this year. Recent research out of Taipei forecasts a 5 percent increase in sales as the technology is used increasingly for TV and computer screens and street lamps. It’s gaining major traction in laptops, in particular — to be used in 60 percent of the 155 million laptops sold this year, up from 14 percent last year. Many LED companies in Asia stand to benefit, including Epistar, Lextar Electronics, AU Optronics and Chi Mei Lighting.