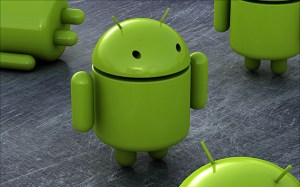 “The global market for smartphones based on open source platforms including Android will reach 100 million units in three years.” That’s the claim made by Panasonic’s director of mobile terminal business, Keisuke Ishii, at a press conference on Thursday.

A hundred million units is a lot. It’s comparable to today’s entire smartphone market. But Panasonic is, at least publicly, placing its bet on Android and other open-source platforms to replace today’s “feature phones” — industry jargon for dumbphones that aren’t smartphones — and to aggressively compete with other smartphones, mainly iPhones and BlackBerrys.

Despite Ishii’s boostery talk on Android, Panasonic didn’t actually introduce or pre-announce any open-source phones at the event. The only Android phone from a major Japanese carrier is NTT’s HT-03A, made by HTC. Ishii declined to specify when Panasonic would actually enter the market.

[Image by Rich Dellinger from richd.com]