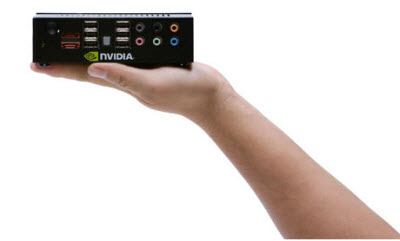 When Nvidia launched its Ion graphics platform for netbooks and small laptops in December, it landed with a thud. But today, the company is announcing that Lenovo is going to use the platform to create a small laptop with 10 times more graphics horsepower than typical laptops.

Ion is a chip that combines an Nvidia graphics chip with a chip set. It’s meant to be paired with low-cost processors such as Intel’s Atom microprocessor in low-power computers such as netbooks, which surf the web and are smaller than laptops. Although the graphics chip is an older model, it is more powerful than typical Intel integrated chip set graphics.

Until now, Intel had locked up the Atom market with its own chip sets. Nvidia executives suspected foul play. They’d heard that Intel wasn’t playing fair, pricing its bundle of Atom with an Intel-branded chip set with Intel integrated graphics at a lower price than for a stand-alone Atom. Nvidia hasn’t sued for antitrust, but it has complained loudly about it. Intel denied the allegations. (See our interview with Nvidia chief scientist Bill Dally).

The Lenovo IdeaPad S12 has a 12-inch screen and improved compatibility with a wide range of games and video programs. The laptop can run Windows XP, Vista and Windows 7. It can play high-definition video, including 1080p Blu-ray movies. You can play games like Spore on it.

Back in January, one computer maker joked at the Consumer Electronics Show that the Nvidia Ion was a great product and the only place to see it was in the Nvidia booth (because no other customers on the show floor were buying it).

Nvidia and Intel are already locked in litigation over whether Nvidia has the right to make desktop and laptop chip sets that are compatible with Intel’s latest microprocessors. And while Nvidia may say that Intel is bullying customers into not using Ion, now that the first Ion customer has emerged it will be just a little bit harder for Nvidia to prove an antitrust case against Intel (should it desire to file one).