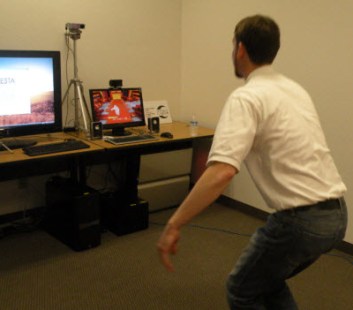 Ever since the Nintendo Wii took the video game market by storm with its motion-sensing controller, next-generation user interfaces have become a big attraction. Canesta is one of the companies trying to upstage the Wii with a 3-D vision system.

The webcam-like camera lets you control your PC, TV, games and other things with natural hand gestures rather than a controller or remote control. The camera detects your movements and then calculates exactly where you are. The system then translates your motion into commands for your electronic devices.

The San Jose, Calif., company is showing off the CanestaVision technology this week at the AllThingsD conference in Carlsbad, Calif. But I got a sneak peak at some of the applications in the works. Various software partners are creating the applications that make use of the camera. 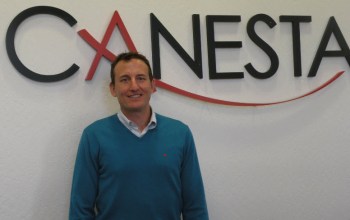 Omek Interactive, for example, is developing games that use them. You can wave your arms or jump up and down to make these happen in the exercise-oriented games. Both Hitachi and Softkinetic/Orange Vallee have worked with Canesta to create TVs you can control with the wave of your hand. And Honda is a partner and investor.

In an interview, Canesta chief executive Jim Spare (right) said the company also sees applications for robots that need computer vision. Human servant replacement robots — like in the Jetsons cartoon series — are a long-held dream. If you combine good computer vision with the artificial intelligence of robots such as the Honda Asimo, you might actually get a pretty good household servant robot.

It’s not true 3-D vision the way that we see. The image sensors in the camera, made of ordinary CMOS (complimentary metal oxide semiconductor) chips, can detect objects based on light reflections. A light-emitting diode (LED) flashes and the infrared light bounces off the objects and then returns within fractions of a second to the sensor, which measures the travel time for the returning light to gauge distance.

The infrared is invisible to the human eye. It works in ordinary light and, as I saw in the demo, the user can still operate the controls from across a room. 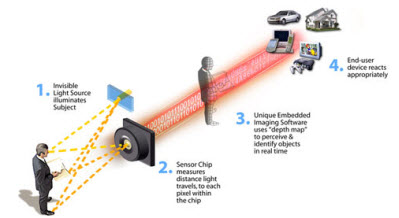 All of this translates into a lower-cost 3-D depth camera, Spare said. While 3DV uses more expensive gallium arsenide chips that take many more processsing steps to manufacture, Spare said his chips are fabricated in factories owned by Tower Semiconductor and cost around $15 or so in volume.

The company has won more than 40 patents since it was founded in 1999. It competes with such rivals as 3DV Systems and PrimeSense, both based in Israel. Canesta has raised more than $58 million from Venrock, Carlyle Group, and Honda. The company says it has multiple Fortune 500 customers.

Other applications include car rear-view cameras that detect obstacles as cars are backing up, security cameras, and industrial automation controls. Nintendo has brought back the gesture. Apple’s iPhone has shown how much can be done with multi-touch screens. But Canesta is good at showing what natural controls will be like when you yourself serve as the remote.