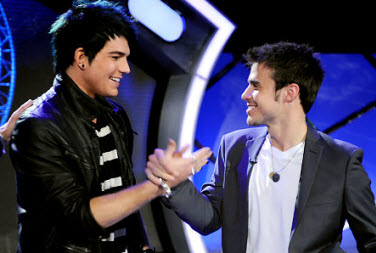 OK, just because I live in California doesn’t mean that I’m a fan of the eye-liner-wearing Adam Lambert, who lost out last week to Kris Allen of Arkansas in the American Idol finale.

But you have to love a good conspiracy theory. Lambert was the favorite going into the show, in spite of his ambiguous sexuality compared to the homespun, folksy and much more mainstream Allen. Allen himself was flabbergasted when Ryan Seacrest announced the winner. I wrote a “sore loser” post about how it might be possible that crowdsourcing failed us and 100 million votes might have gotten it wrong.

Now the New York Times reports that AT&T representatives may have inappropriately tilted the vote in favor of Allen. The story says that AT&T representatives in Arkansas were invited to attend two different Allen fan parties on the night of the voting. The representatives provided phones where fans could vote via text message an unlimited number of times for free. And they also taught the fans how to vote 10 times at once with single button push in what is known as a “power text.” There was no such AT&T collaboration with Lambert fans.

Could such a small number of people, even with automated voting technology, tip the scales in a contest where so many votes were cast? We can’t be certain. Fox Broadcasting said it was absolutely certain that the results came out right. AT&T said the pro-Allen activity was the work of a few local employees who were caught up in the excitement over Allen in Arkansas. But now the conspiracy fans have some real ammo.