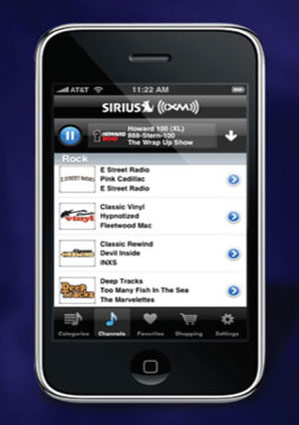 Can this app help Sirius XM repay its half-billion-dollar loan from Liberty Media?

The app doesn’t look much different from iTunes at first glance. That’s good. It’s not weird or ugly.

The bad news is the app requires users to sign up for a Sirius XM subscription. No doubt the company thoroughly researched and tested its pricing to come up with the odd monthly fee of $12.95. But in my own experience, streaming music from an AT&T iPhone fails far more often than satellite radio does.

Business Insider’s Dan Fromer beat me to locking down the shortcomings of a streaming Sirius XM app:

It’s hard to see iPhone users signing up as new subs in droves. There are plenty of free, ad-supported music and streaming radio services on the iPhone already; other apps like MLB’s At Bat — which includes live radio streams of all baseball games — replace some of Sirius XM’s “exclusive” content; and it seems that any diehard Howard Stern fan would already have a Sirius subscription. That said, free apps include ads, so it’s possible some would pay extra to hear commercial-free music.

No ads is a big part of satellite radio’s appeal. It’s hard to describe the effect in words. But after a few months of XM listening, I found myself shaking my impotent freelance-writer’s fist at the annoying ads on some Internet stations. No matter how good the music, the enhanced-audio voices hawking discount mattresses and freedom from credit card debt made it impossible to work.

Adding my favorite few XM channels to my iPhone may be worth three bucks a month, but to win over new $12.95 subscribers Sirius XM should offer a free 90-day trial of the fully-featured app. Then cut them off. They’ll be back.