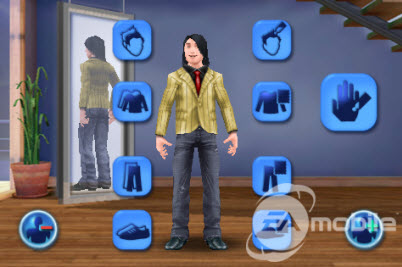 Electronic Arts is launching its Sims 3 game across as many platforms as it can next week. But one of the most interesting to watch will be the game’s debut on the iPhone. That’s because the game represents a big effort inside EA to get the game right on the fast-growing platform.

While most iPhone games are built by tiny teams in a few months, EA has had its team working on the title since November, 2007. That’s an eternity for an iPhone game.

Sims 3 is a test on whether a big game with a big budget can work on the iPhone, whose audience typically favors games that don’t carry major brand names and are homegrown on the iPhone platform. Will EA succeed with its Sims 3 brand recognition, or will something like Tapulous’ Tap Tap Revenge continue to rule the iPhone game market? 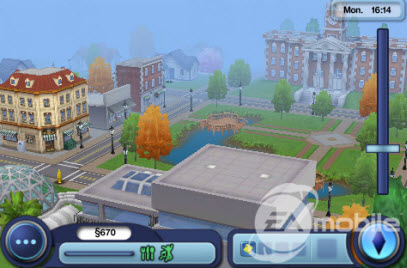 In many ways, the Sims 3 iPhone version mirrors the Sims 3 for the PC. You create a Sim character using a similar user interface to the PC game, except you use your fingers on the touch screen rather than a mouse. Your character has life goals and wishes. You can make the character into a “hopeless romantic,” “maniac,” “sleeze,” “jerk,” etc. Each character has five traits that drive their actions. 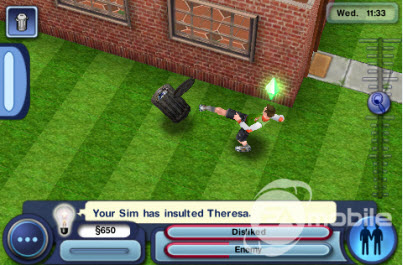 You can follow a tutorial on how to play, or skip it and start exploring. You can see the interaction with Sims up close or pull back to a top-down view of the action. You swipe two fingers on the screen to rotate the camera. You can leave the phone on and let your character interact with the town on its own. If your character is a kleptomaniac, you may return to the phone to see what items your character has stolen in your absence.

If you want to scroll through options for clothing, you swipe your finger across the screen to see a Cover Flow-like image scoot from side to side.

While the iPhone doesn’t have the graphics power to reproduce the PC game, it does let you zoom in on your character so you can see freckles and such. You can change your Sim’s hair, clothing, or randomly generate a character with its own clothing.

There are mini games within the game. In one of them, you can fish. You tilt the iPhone (which has a motion-sensing accelerometer) to move your hook toward the fish. Then you yank the iPhone back to hook the fish once it bites. You can sell the fish at the local grocery or eat it and make your Sim happier. You can also play cooking games, where you shake the iPhone to stir whatever’s in the pot. And you can play home repair and gardening games, too.