Google launched a new feature called Google Web Elements today at its Google I/O developer conference in San Francisco. The new tool, available starting today, allows web publishers to easily add Google content, from news feeds to calendars to maps, with a simple cut and paste. While the search giant has made these APIs available in the past, Elements makes them understandable and accesible for non-developers and other layman users.

For example, if a web publisher wants to add a feed of Google News stories in a particular genre to its site, it simply tells Google Web Elements which keywords or categories it is most interested in and adds the code the tool generates to the site in question, just like any other embedded content. For example, you can choose to display top stories, business stories, sports stories, etc., depending on the theme of the site.

Google Web Elements even allows sites to add its search capabilities and Google documents (much like DocStoc, Scribd and SlideShare, only restricted to Google Doc offerings), as well as YouTube videos. One of the six widgets is a newer concept called Conversation, which allows visitors to your web site to add their own comments and content (videos, links and the like). This feature closely resembles FriendFeed, in that other users can reply to comments made as well. The company says it will be adding more widgets to the Elements portfolio in the near future.

Web Elements represents an important step for Google in the same direction as its Gadget offerings, making the web even more customizable for its users. At the same time, the service seems like it will only be useful to bloggers and amateur web builders. The appearance of each of the widgets is distinctly Googley, and not highly customizable for beginning and intermediate designers. Larger sites and professional publishers will continue to seek or build their own tools that add similar features seamlessly. 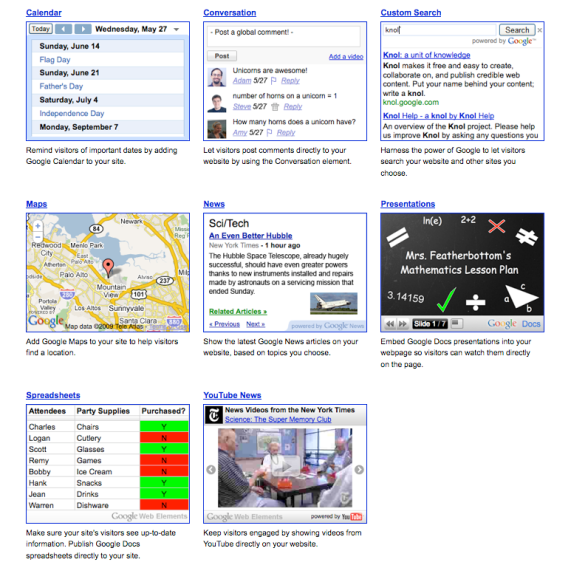