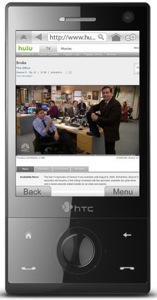 Skyfire, a mobile browser that wants to bring the full desktop web experience to mobile phones, is taking its product out of beta testing today and launching version 1.0. Sometimes, that’s a signal that a service is ready for mass usage, but it looks like Skyfire is pretty big already, with more than a million users.

That one million user mark was one of the milestones that made chief executive Nitin Bhandari comfortable with taking the beta label off the browser, he told me. Others include improved speed and navigation, as well as deals with mobile operators in Europe.

The end result, Bhandari says, is that Skyfire users should be able to access the full features of any website on their phone, including those with lots of video such as Hulu and YouTube, plus complex, interactive applications like Facebook and Google Docs. He describes the browser as bringing an “iPhone-like” experience to other smartphones, but with advantages like support for Adobe’s Flash format. (The lack of Flash support limits the sites that work on the iPhone, and means that users must access a separate application for YouTube videos, rather than watching them in their browser.)

To show off Skyfire 1.0, Bhandari and I watched a Hulu video on his phone, then accessed his Facebook account, and everything worked as smoothly as promised. One of the less immediately obvious but still powerful aspects of the browser is its ability to analyze and zoom in on the different sections of a website, making it doable to navigate some sites that I find completely overwhelming on the iPhone (which offers a more limited version of the same feature).

Skyfire also recently launched a home page for its users that combines activity notifications from social networking sites, along with RSS feeds from news sites — Bhandari describes it as FriendFeed meets Google Reader.

The Mountain View, Calif. company has raised a total of $17.8 million in venture funding. Supported phones include devices from Nokia, Samsung, LG, HTC, Palm, and Motorola, with a BlackBerry version still in testing.