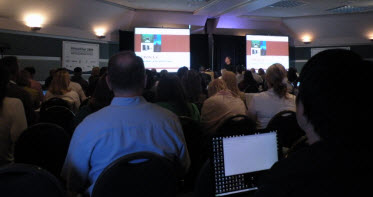 Yes, these people in the picture are real. What’s weird is they’re attending a conference about virtual events. You know, the kind they have only in cyberspace where you pretend you’re at a live event.

As surreal as it sounds, the fledgling virtual events industry gathered today at a first-of-its-kind Virtual Edge event at the Santa Clara Convention Center in Santa Clara, Calif. While other conferences have been pummeled by the recession, there were 500 people registered and an overflow crowd this morning.

The reason for the interest is that demand for virtual events has skyrocketed during the recession, said Malcolm Lotzof, chief executive of Chicago-based virtual events firm InXpo, one of several companies that stage the virtual events for all sorts of customers. As companies seek to cut costs and curtail travel, they’ve come to see the wisdom of putting on virtual events on the Internet. 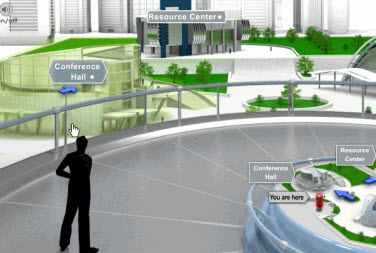 “We’re in the early days of an industry, and we’re all talking about how we move to the next generation,” said Lotzof, whose company has 70 employees and whose virtual events draw anywhere from 1,000 to 20,000 attendees.

Ideas for ratcheting up the experience are coming from “experience marketing” companies such as George P. Johnson, which stages events in the real world. Those ideas range from Twitter integration to embedding golf games into virtual events for salespeople.

If the salespeople can’t meet for a boondoggle in person, they can at least take some moments to enjoy themselves while playing virtual golf, said Brent Arslaner, vice president of marketing and channels for Unisfair, another virtual events firm, which has staged more than 650 events.

Big companies are showing varying levels of interest at the conference, including Cisco, Oracle and IBM. Kelly Graham, manager of virtual events at Cisco, said the company started experimenting with virtual events when it noticed people would log in early to webcasts. In 2008, it moved into high gear when it bought the Webex virtual conferencing system.

Next week, Cisco will hold a Partner Summit with more than 4,000 registered partners, with much of the activity happening online in conjunction with a live event in Boston. The advantages are lower costs, more effective marketing reach, the ability to demonstrate a wide array of technologies, and better measurement of attendee satisfaction.

Graham said that several big virtual events have had great responses. One drew people from 83 countries. Another drew 1,300 attendees who spent an average of 81.7 minutes in the virtual event. On average, studies show that online attention span is typically seven to 12 minutes.

Oracle, meanwhile, has seen a 171 percent increase in attendance for its various online events in the past fiscal year, said Paul Salinger, vice president of marketing at Oracle. Attendance at physical events, by comparison, have been about flat.

“There’s no question the economy is driving this,” he said.

IBM has also been investing for the past few years in virtual worlds such as Second Life, social media, and virtual events to generate deeper relationships with customers and to help break through the noise of competitors, said Sandy Carter, vice president at IBM. The company can even defray the costs of its online events by selling sponsorships to virtual exhibit booths for thousands of dollars. The company has used virtual events firm On24 to stage three live events that drew more than 3,500 registrants.

Lotzof said one of the benefits companies have discovered is “just-in-time booth staffing.” At most events, there’s usually a mismatch in staffing, whether an event is thinly attended or crowded. But with online events, it’s simple to add another staff member to answer questions.

As far as future plans go, the virtual events companies don’t want to race too far ahead of the tastes and technology awareness of normal business people. That means we’re a ways off from high-end 3-D graphics that can create ultra-realistic exhibits and virtual avatars.

“This has to play well in places like Omaha,” Arslaner said. “It’s got to be pragmatic.”