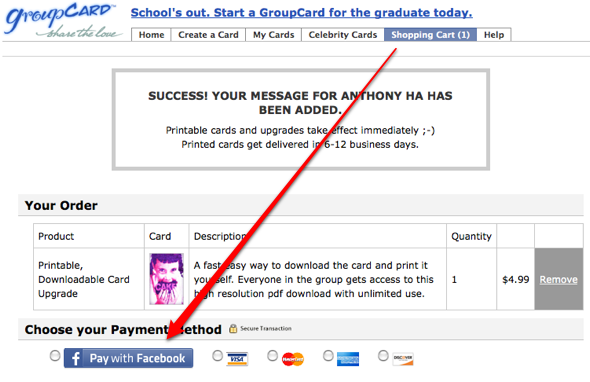 Third party applications on Facebook are beginning to test out the social network’s new, in-house payment system, presaging what has been described as a wide-ranging war among many companies to offer a single, universal virtual currency. There’s been no formal announcement of a launch yet, but an implementation is already live on an app called GroupCards, as spotted by TechCrunch earlier today.

It works along the lines of what we first heard earlier this month. When you’re trying to purchase a virtual good in an application, you now see an option to purchase using “credits” (the virtual currency system that Facebook already uses in its gifts store and in some other tests). In GroupCards, when you’re trying to purchase an e-card for a friend, you see a “Pay with Facebook” option. Click on it and you’ll see a window with information about buying credits — if you don’t have earned enough already through buying them in the Facebook gifts store. Then, you can choose how many credits to buy, and taken to a credit card payment page to finish the process. 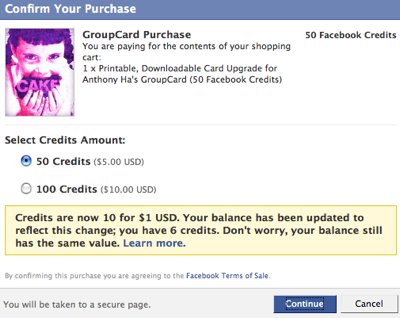 This test also explains why Facebook updated its terms of service around payments on Wednesday. It clearly wants users to understand how credits work as they start getting exposed to them on applications.

This is a smart step, because Facebook can make a cut of every transaction that goes through its payment system. Third party app developers are already on track to make up to $500 million in total transactions this year, but so far only third-party providers have enabled payments.

The fact that Facebook is using its own brand in this payment system could make users more willing to put money in — and so make more for developers and for Facebook.

The bigger question is whether Facebook could scale this payment system out to the web, and let people use it for real-world transactions, especially as existing payment service providers from PayPal to Apple try to more or less do the same thing. For more on that, see the guest column we published earlier today, titled “The virtual currency wars are coming” by TwoFish president Lisa Rutherford.