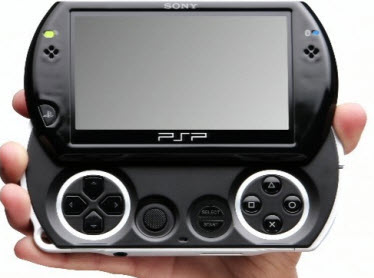 Details of the latest version of Sony’s PlayStation Portable, the PSP Go, keep leaking out.

If the details are correct, this new device will be one of the headline grabbers among all of the new developments at the E3 game show next week.

Engadget reports that Sony will announce the PSP Go on Tuesday.

The gadget has 16 gigabytes of internal flash memory for storing games, videos and music. And there is no Universal Memory Disc drive, the proprietary Sony format that has been slammed for being closed in the age of the (slightly more open) iPod.

Other details include a 3.8-inch display, built-in Bluetooth, a Memory Stick Micro slot, and support for the PlayStation Network. The device is 43 percent lighter than the current PSP-3000 model. You’ll be able to rent movies and TV shows over the Wi-Fi-enabled network.

Is this enough to take on the Nintendo DSi? It looks like there is no touch screen, which is one of the big advantages of the DSi, as well as the Apple iPhone. The wide screen will be good for movies and music. If that’s what you want, then the PSP Go is a better toy than the DSi. But Sony’s PSP games certainly need a shot in the arm. Hardware isn’t the only disadvantage that Sony has, given the DSi’s popular games such as Pokemon titles. The PSP Go will probably compete squarely with Apple’s iPhone and iPod Touch. I look forward to seeing what this handheld can do next week, and which handheld comes out on top.