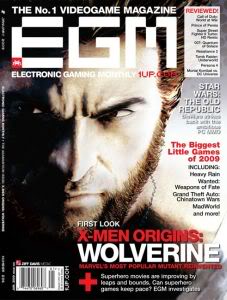 First things first: I think we can all agree that no magazine, least of all EGM, deserved to die with Hugh Jackman’s horrifically ugly blown-up mug gracing its cover.

But secondly, let me say that I wish Electronic Gaming Monthly founder Steve Harris nothing but the best in his new (old) venture, and this blog in no way represents the opinion of Bitmob’s staff as a whole. And I have no inside knowledge on any behind-the-scenes wheelings and dealings — like all of you, I’ve only read Harris’ press release and former EGM editor-in-chief James Mielke’s 1UP blog on the subject. But the reaction to this news, from Twitter to gaming sites to gaming message boards, has been surprisingly optimistic and almost universally positive. My reaction’s a little different — and it’s partly because of my personal connection to the magazine.

I spent the early part of this decade finishing up my journalism degree out in Minnesota (yes, contrary to what you may have heard, quite a few folks in the gaming media do actually have these elusive degrees). But unlike my classmates, I didn’t dream of working for the Associated Press, Sports Illustrated, or the New York Times. I had but one goal: to see my byline in Electronic Gaming Monthly, the magazine that had been the pinnacle of "gaming journalism" in North America since the late ’80s. But it wasn’t simply because it was "EGM." That didn’t matter. What made EGM special to me wasn’t the name on the front of the magazine — it was the collection of people.

And my respect for EGM only grew after I got hired at 1UP in early 2006, as I discovered the secret behind EGM’s tradition of excellence. Its writers weren’t born — they were made by a culture that valued quality, ethics, and work ethic. Everyone involved with EGM worked extremely hard to make it that way — settling for anything less was unacceptable. Sure, Harris can bring back the old logo, retro-style screenshots, and even the classic phonebook thickness if he wants — but without the original staff, can he recapture the culture of quality, the most important piece of the puzzle? In order to bring in established, trusted names, he’s going to have to spend some money. If he can’t afford to do that, can a new EGM thrive without Milky’s extensive industry contacts and a stable of talented writers and editors? Are readers going to trust EGM with unknown, unestablished faces, no matter how talented?

Though some observers are questioning the wisdom of launching a print venture in this economy, I’m actually not that concerned about that part of the equation. After all, niche publications like Play magazine have managed to survive — and frankly, if Ziff Davis hadn’t been burdened with massive debt and an archaic magazine-distribution model, the "old EGM" might still be around today. And as Milky pointed out in his blog, EGM is among the strongest brands in the industry. Sure, Hearst may have wanted to purchase 1UP and not EGM, but whenever I’d tell people I worked at 1UP, I’d get a puzzled look in return — even among some who considered themselves hardcore gamers. But when I’d mention EGM, their eyes lit up. The name means something to an entire generation of gamers, and they desperately want to support it in any way possible.

Bu does that built-in brand loyalty necessarily mean the new EGM will succeed? Sure, former GameFan head Dave Halverson’s succeeded to a certain extent with Play, but what about Hardcore Gamer Magazine? It also tried to recapture GameFan’s legacy — with several former staffers on board to add credibility and quite a few young, talented writers and editors along for the ride — but it couldn’t survive in this market and ended up meeting a rather unfortunate fate…sale on eBay.

In order for the new EGM to truly thrive, it needs to shed the shackles of failed business models and dated publishing concepts and truly take advantage of the medium — something that the old EGM strived for in its death throes but never quite achieved. These are hardly original ideas, but how about a subscriber-based model so you print only the issues you need, higher-quality paper and artwork, and in-depth articles that online media can’t or won’t replicate?

Despite my skepticism, I’m looking forward to seeing what Harris has up his sleeve — and if he’s got a good product that retains the spirit and vision of the original mag, I’ll definitely support it with a subscription. But to me, EGM was that collection of people I worked with over the past three years. That died on Jan. 6, and it’s never truly coming back…

….unless, of course, Harris’ master plan actually includes a reformation (even partially) of the old EGM crew. Then it’s a whole different story.