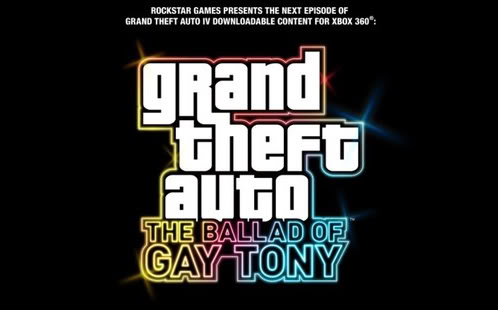 "Grand Theft Auto IV’s second downloadable episode, The Ballad of Gay Tony injects Liberty City with an overdose of guns, glitz, and grime. As Luis Lopez, part-time hoodlum and full-time assistant to legendary nightclub impresario Tony Prince (aka "Gay Tony"), players will struggle with the competing loyalties of family and friends, and with the uncertainty about who is real and who is fake in a world in which everyone has a price."

Sounds like their trying something new. As per usual, Rockstar is knocking on the general publics door with a pocket full of controversy. In a time where only 2 states recognize same-sex marriage, anything that dares to delve into homosexuality is considered pretty edgy. Now that the concept of homosexuality has found itself in video games, I’m pretty worried that the same people who brought you the "Sexbox" will jump onto the "we hate gay people" train and start claiming that Video Games are brainwashing our children into becoming homosexuals. Yes I know this isn’t the first time there has been homosexuality in a video game, but this is the first one that actually has "Gay" in the title, causing the general media outlets to actually notice it. Once they notice it, chaos will probably ensue.

What do you think of Rockstar delving into the realm of homosexuality for the first time in a video game? And how do you think news outlets such as Fox will react to it?