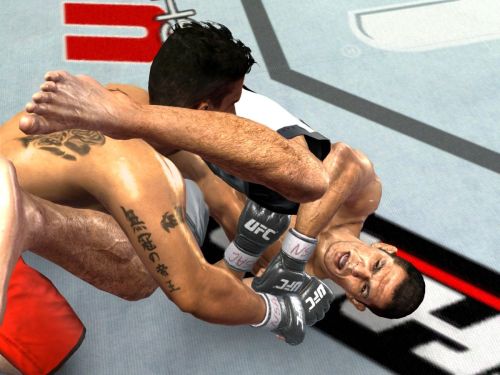 Fighting, no matter how brutal, satisfies some hidden genetic-code in the human body. If you’re like me you rarely quench the burning desire, at least not first-hand. My flames are usually extinguished by watching someone else’s bones getting broken. UFC 2009: Undisputed, likes its real-life counterpart, helps people like me, but there are times when Undisputed only adds fuel to those flames.

If you’ve ever seen a match of the Ultimate Fighting Championship, you could probably attest to its sheer amount of brutality. Everything from submissions leading to bones nearly snapping, to mounted elbows are all allowed. Undisputed does let you participate in such events, but it’s closest gaming counterpart is the stand-up only Fight Night series. And like Fight Night, it’s oh-so-satisfying throwing a hay-maker into someone’s skull (especially a friend’s). At times I even feel like a modern-gladiator, jumping at the opportunity to knock-out my obviously tired opponent (again, like Fight Night). It does makes sense for the two to be so similar, after all, boxing is one of the many styles included in the MMA arsenal. But apparently Undisputed doesn’t understand acronyms, at least not very well. Mixed Martial Arts also includes wrestling (and other grapple styles), as such, take-downs can lead into a deadly submission. Game or not. However, finding yourself on the other side of a take-down in Undisputed, and you’re more like a turtle than a modern-gladiator. Your only defense is to twirl the right analogue-stick (yep, just like Fight Night) in hopes of getting into a kinder position. But even then, finding that "sweet spot" on the stick seems harder than getting out of a real-life clinch.

Thankfully, there are fighters that can make escaping such situations slightly easier. And this is where Undisputed really takes advantage of its name. If you’re not one of those UFC fans who gobbles-up every fifty-dollar pay-per-view, then getting the chance to recreate the fight between Chuck "The Iceman" Liddell and Quinton "Rampage" Jackson (in "Classic Fights" mode) won’t appeal to you. But for people like me who had recently gotten into watching the sport, Undisputed has only risen my interests. Now I’m watching every highlight I can, from its beginnings to its current supremacy. Unfortunately, I see UFC 2009: Undisputed like the sport when it first came-along; lacking direction and separation from its inspirations.