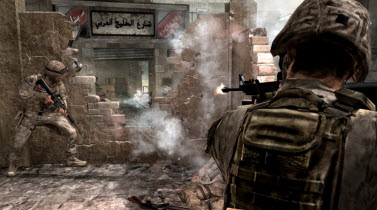 Activision Blizzard webcast a press conference today, highlighting the games it expects will generate millions and millions of sales for the company this year. The event was the first of many from game companies at the E3 conference.

While other companies are touting their new titles solely from the gamers’ view, Activision Blizzard spent its time pitching its financial performance to analysts, describing the overall drivers that are enabling it to become the largest independent maker of video games. It has 7,000 employees and $3 billion in cash with no debt.

Bobby Kotick, chief executive, said he believed the video game industry would grow from $39 billion worldwide in 2008 to $55 billion in 2012. He talked about the reasons games are becoming a bigger part of pop culture and the dominant form of entertainment even as other industries contract in the recession. He said new user interfaces, such as the Wii game controller, are broadening the appeal of games to people who never played before. The company is investing heavily in these new ways to control games, as evidenced by its upcoming skateboarding and disc-jockey game controllers.

Kotick also noted that video games are holding up in the recession because they offer many more hours of entertainment for the amount of money spent in comparison to traditional forms of entertainment. Activision’s own research showed that 18 months ago, about 12 million people played games online with a friend in the U.S. Now that number is 23 million, up 92 percent. About 15 million played online with someone they didn’t now, and now that number is 30 million. And 10 million played with a team or “clan” of friends on a regular basis. Today, that number is 17 million.

Kotick also said gamers are spending 10 percent more on games today than they were just a year ago. He noted that average prices for video games are holding up much more in the current console cycle, which began with the launch of the Xbox 360 in 2005, than in past console cycles. Kotick said consumers who once spent $50 on Activision titles are now spending $500 on various Activision-related games. Kotick said these major trends are the reasons the company has had a 27 percent return on its stock price over the past decade.

Activision Blizzard, which was formed last year from the merger of Activision and Vivendi Universal Games, is now bigger than Electronic Arts. Part of the reason is its heavy income from Blizzard Entertainment’s World of Warcraft, the No. 1 massively multiplayer online game. Kotick said that online games such as WoW are generating operating profits of 60 percent or more, thanks in part to the fact that there is no or little cost of retail distribution. The spread of broadband and faster broadband speeds will only feed the online game market.

Skateboarding star Tony Hawk made an appearance at the event to tout Tony Hawk Ride, which uses a faux skateboard to take advantage of the Wii’s motion-sensing platform. Hawk acknowledged that the skateboarding franchise, which has generated $1 billion in sales over the years, needed a shot in the arm.

Activision Blizzard has a bunch of other titles coming, including Prototype and Singularity, which lets you solve puzzles and take out enemies by warping time.

Activision Blizzard is also making a big bet that we’re all closet disc jockeys with its major game, DJ Hero, a spin-off from the Guitar Hero family, which has sold more than $2 billion, or more than four to one more than its closest rival in the U.S. and more than 10 to 1 in Europe.

Music stars Jay-Z and Eminem are helping to promote the $120 game, which comes with a faux turntable. By contrast, MTV and Harmonix are going to show off The Beatles: Rock Band, which marks the first time the Beatles music has been used in a video game.

Dan Rosensweig, the former chief operating officer of Yahoo who joined Activision Blizzard a month ago as head of the Guitar Hero business, said the company is looking closely at expanding its music console franchise into online sectors. Already, gamers are downloading a lot of songs to supplement the music that comes with their Guitar Hero console games.

About 300,000 songs have been created by fans using the instruments from the most recent Guitar Hero World Tour game launched last fall. Those songs have been downloaded more than 17 million times. Rosensweig said the company will expand beyond the consoles into new areas such as mobile. On that front, it better do so fast, as Tapulous has shown that its Guitar Hero-like Tap Tap Revenge family of games has become extremely popular — as many of a third of iPhone gamers are playing it — on the iPhone. Coming soon is Guitar Hero 5, which makes it easier to get access to downloadable content and has more ways to socialize with other players via the Internet, Rosensweig said.

Mike Morhaime, head of Blizzard Entertainment, said that since Blizzard’s name was established in 1994, the company has had 11 No. 1-selling games. The company is launching its Starcraft II title sometime this year, the first time in a decade for a relaunch of that brand, which has sold 11 million PC games to date. In 2008, Blizzard exceeded $1 billion in revenue, Morhaime said. The subsidiary has tripled its revenue since 2005.

Morhaime said the company is working on Starcraft II and two expansion packs, as well as Diablo III. It is also overhauling its Battle.net online game service to accommodate the new launches. Starcraft II will begin its beta test this summer at the same time the new Battle.net service begins beta testing. Formal release is expected for Starcraft II by year end.

World of Warcraft now has 1,000 realms running on 17,000 servers, which represents a huge barrier to entry for challengers, Morhaime said. There have been 20 major content updates for the online game world, including two expansion packs.

The company plans to begin making its transition to Netease, a new online game partner in China that will replace its current partnership with The9 by the end of the month. And Morhaime said that Blizzard has begun work on an as-yet-unnamed massively multiplayer online game.