Most gamers have heard of the revered RPG behemoth–Square-Enix, and possibly even their most famous franchises: Final Fantasy and Dragon Quest, but few have heard of their lesser known titles such as Last Remnant and Infinite Undiscovery. Well, if you think these titles are obscure, try SNES-era RPGs by Enix, like Terranigma.

I’m no Enix expert by any means, but I’ve heard great things about this RPG that never reached the land of the SUV and Bacon Double Cheeseburger. I recently discovered this game after watching videos of RPGs on Youtube. After conversing with other gamers and researching it, I learned that Terranigma was a renowned action-RPG that never reached America. It’s the third part of a series that includes: Soul Blazer, Illusion of Gaia, and Terranigma. European gamers often get shafted when it comes to RPGs (they never received the legendary Chrono Trigger!), but for once, they were able to scoff at lowly American gamers while slowly grinding our beloved freedom fries into dust.

For the record, I’ve only played Illusion of Gaia, so I don’t know how Terranigma compares to the first game in the series, but it at least appears to be a significant departure from Illusion of Gaia. It carries over the mysterious nature of that game, but the visuals, soundtrack, battle system, and plot share little with its predecessor. Due to the rarity of Terranigma and the fact that it wasn’t released here, you’ll have to spend over one thousand dollars if you want to play this fabled action-RPG legally. I’m not a promoter of piracy, but unfortunately, there is only one way to play this rare RPG, and that is via the Internet. Luckily, this game was released in the UK, so there is an English translation available for those of you who want to get your hands on this game.

I already explained what Terranigma is, but I’m not here to tell you how it compares to other SNES action-RPGs. Rather, I’m going to chronicle my experiences from the first two chapters of one of the most mysterious games I’ve ever played.

When you first fire up Terranigma, you find your main character, Ark, lazing away in his bed, like a spiky red-haired character we’ve all come to love. Ark seems not to have a care in the world, and is known around town as a mischief maker. The adults scattered about the village seem to despise Ark, while the kids love him for some reason. There’s a reason for this, as Ark is known to throw pots at villagers, shut down mills, steal food, and flirt with a village girl. There could be more to why the villagers hate Ark, but the game chooses not to reveal whether that is the case.

Even though there doesn’t seem to be much occurring in this peaceful little hamlet, there is a mysterious air that permeates the village. Large bubbles seem to be floating through the air for no apparent reason and village people claim they can see another world in a lake, but these aren’t the most inexplicable elements of the town. What I found the most strange was the fact that the village had no visible exit, and a mysterious door existed in the Elder’s house that was supposed to remain unopened. We’ve all been kids at one time or another, so most us would find what happens next pretty predictable. One day when the Elder is gone, some locals convince Ark to help them open the door, and he obliges. A couple pots is all it takes to break down this fine piece of woodwork.

What does Ark find inside? An incredibly dark room with a bluish hue and a stairway leading down. After descending a couple staircases, Ark comes upon a mysterious box. In order to open it, he as to wait patiently. A voice calls him, and he decides to give in to his unknown beseecher. He unleashes a mysterious creature that expresses his gratitude, but won’t tell him why he was trapped. Ark’s close lady-friend, Elle slowly enters the room as they are speaking. During the conversation, Ark notices that Elle has been rendered motionless, as have the other village people. The creature remains with Ark and gives him a jewel box, which is basically his portable inventory, but leaves it up to Ark to figure out what is going on. Ark then returns to the only conscious village-person, the Elder.

The Elder had left the village while Ark opened the door, and he seemingly knew what Ark would do. Clearly, the Elder knew what Ark had done, and seemed to understand the predicament the world was in, but he gave Ark a bit of guidance. He mentioned to Ark that the village people could be saved, only if he traversed the world and activated the five towers. Apparently, the village always had an exit, but it remained hidden to the public eye, so they would remain unaware of the world around them. The Elder revealed the exit that once was invisible to Ark, and sent him on a journey into the unknown.

As Ark set out into the world, he noticed that the world he was previously unaware of was a bleak one. The terrain was much like the surface of the moon, with rivers containing molten lava and there were ice crystals strewn about. There were no noticeable villages–only the village he had come from and five towers. There didn’t appear to be a sky above, but rather, a blue sphere that intersected the world. What this sphere was remained unknown to Ark, so he decided to climb the first tower. 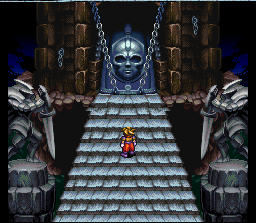 Ark would ascend a tower that was home to monsters, puzzles, traps, and a guardian. When Ark reached the guardian, he would fight the leader of the monster horde, and then activate a room which revived a continent called Eurasia. After reviving a continent and what looked like people from his village, Ark proceeded to his next destination–another tower. Ark would then climb this tower and three others; each with increasingly hard enemies and puzzles, and would revive four other continents: S. America, N. America, Africa, and Australia. He couldn’t see the revived continents, but it was apparent that people in his village were being revived one by one. After having completed his mission, Ark returned to his village and found everyone returned to their original state. He then spoke with the Elder who congratulated him, but then let Ark know that this was just the beginning. The Elder informed Ark of a hole that existed near the village that would let him go to the "World". Ark informed a crying Elle of his imminent departure and then preceded to enter the hole, which the Elder had made him aware that he’d be unable to return from until he revived the world. 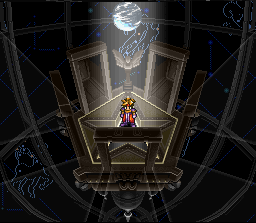 Ark didn’t know what awaited him on the other side, but being adventuresome, he decided to enter the hole. He immediately noticed that this world was a barren wasteland devoid of any kind of life. There were no humans, no plants, and no animals. Ark then set off on his journey to revive life on what appeared to be the continents of Earth (the land masses he had resurrected earlier). His first destination would be the innards of a dead tree that was infested with monsters and poison.

The innards of the tree, which led underground were enormous–considerably larger than the towers he had previously entered. Its inhabitants were vicious, and there were rivers of poison and water. Ark’s journey was long, but he discovered two items that would make his life easier: an antidote that would protect him against a room filled with poison, and flippers to navigate water. He proceeded to enter a room containing poison to discover a massive monster that obviously was the commander of the monsters. After waging an epic battle, Ark defeated the monster and revived the great tree, as well as vegetation all over the world. Ark could converse with this vegetation, but the vegetation made him aware that much more of the world needed to be revived. They mentioned that he’d need to awaken birds that existed on a northern continent. 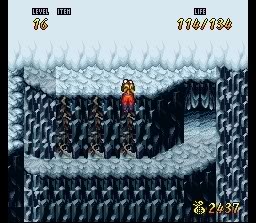 Ark still didn’t know anything about this mysterious world, or what his purpose was, but he proceeded to awaken the sleeping birds. It wasn’t an easy task, but after doing so, the birds were willing to take him to other continents, so he could complete his mission. Ark would soon revive the animals of the world, which would then help him cross Arabia to reach Tibet. He didn’t know what the fourth thing he’d be reviving was, so he assumed there was still more of the world to explore. Ark climbed an enormous mountain, survived avalanches, and fought a difficult boss called Dark Morph, and then received a message from an unknown source saying he had "revived the world".

Ark would then awake in a land that included beds and humans other than those who inhabited his village. Who these humans were and what happened to this world would remain unknown, but it is clear that Ark revived those bipedal creatures that once slept. What is the connection between his homeland and this mysterious new world he had been reviving? Why had it laid dormant? Is there an ultimate villain? Was the human race responsible for the destruction of the planet? Who was the mysterious Elder of Ark’s village? These are all questions that will hopefully be answered after venturing further in the mysterious Terranigma.