It It’s just a rumor, but with E3 looming so close, I wouldn’t be too surprised. The rumor started (an ended) with a leak in the Bungie.net forum search… 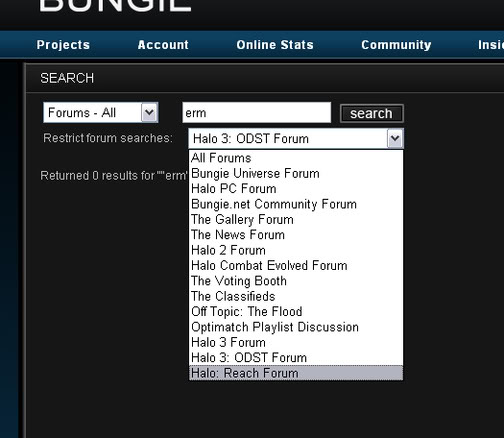 As Kotaku pointed out, the book Halo; The Fall of Reach served as a prequel to the original Halo game. According to Halopedia Reach was a very important planet in the Halo universe. It served as Headquarters to the majority of the human military, and was also most inhabited planet next to earth. Near the end of the Covenant war, Reach was discovered by the aliens and completely destroyed, this event was dubbed "The Fall of Reach". Master Chiefs role in all this is that he was aboard a hijacked Covenant ship heading to the Covenant planet in an attempt to take their leaders hostage. However, before they could leave, they received a signal ordering them to return to Reach immediately to defend it against the Covenant. They lost.

The guy who sent Kotaku the picture also claimed that the game was slated for fall 2010, which is consistent with Bungie’s release schedule with Halo 3 and ODST both being released in the fall. He also claimed that it would be announced at Microsoft’s E3 Press Conference on June 1st, which is as good a time as any to announce a Halo game.

My guess is that Halo: Reach would follow the events that occurred during the planets downfall, and that if the game is announced at Microsoft’s E3 Press Conference, it will be one of the things Major Nelson was teasing back in January about how exciting this years E3 was going to be. What could make anything Microsoft related more exciting then a new Halo game? That, or all this is completely fake or irrelevant. Your guess is as good as mine, what do you think?