After a day of intriguing claims about Twitter — younger people don’t use it so much; men follow each other and nobody tweets — here’s something else. Google Trends, the search engine’s automated site analysis service, is showing a drastic drop in “news reference volume” about Twitter, with a relatively less but still noticeable drop in the volume of searches for the micro-blogging service. 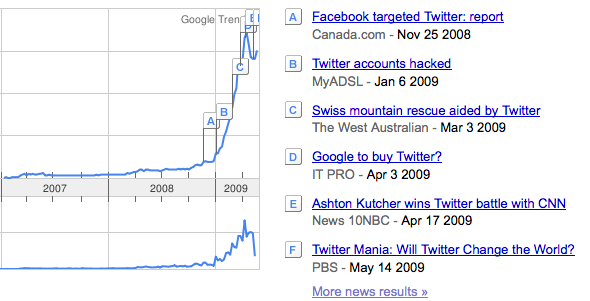 How to interpret Google Trends? Through the prism with which you view Twitter already, of course! Twitter press coverage almost certainly experienced some sort of high-water mark in April, with Oprah’s coverage and other events, like rumors about Google possibly buying it. Perhaps the press, generally speaking, did what we always do, which is get bored and moved on to other topics. Maybe, thanks to Oprah, we were finally able to stop talking about Twitter after all? Perhaps we’ll see a gradual growth in Twitter coverage that will eventually surpass the April mark?

Twitter press coverage has historically seemed to outpace its search volume. Interestingly, according to Google Trends, Twitter search volume has taken much less of a hit than coverage. Perhaps searches will continue to fall if press coverage continues to fall? Maybe the trend is changing?

Caveat: Trends displays relative search volume but it defines news reference as the total number of times that the searched-for term appeared in Google News stories. Because Google News doesn’t count most blogs, this is not a measure of total discussion about Twitter happening on the web.

How does Twitter compare to other sites? Facebook, a not-entirely-dissimilar social network that is also much larger than Twitter (at least at this point), is also seeing some sort of drop in press coverage, although not as drastic. The result seems to be that Facebook once again has more overall press coverage than Twitter. And, unlike Twitter, it appears Facebook’s search volume has continued to slowly grow. 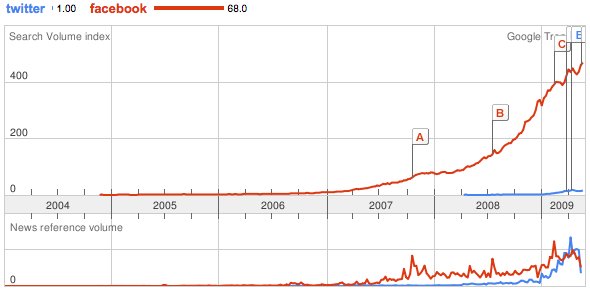 Once we get those numbers, we’ll maybe have a better idea about what’s going on with Twitter and Facebook — at least, in the near-term. Is Twitter actually dropping in traffic?

In the long-term, a lot of this probably won’t matter. Both services will continue to evolve. Twitter will get new features, such as filters (hopefully) to stop all the noisy tweeting; new users will come back more than some have thought they would. Facebook will hopefully continue simplifying its interface, tweaking it so people can do things like find where the events application went to in the most recent redesign. Both, certainly, will see more competition — from other social networks, and from companies that haven’t been even conceived of yet. A Google Trends look a year from now will reflect different sorts services than are being measure today.

Thanks to Doug Sherrets for the tip.You can follow me on Twitter here as well as fellow VentureBeatniks Paul Boutin, Dean Takahashi, Anthony Ha, Camille Ricketts and Matt Marshall. We have a VentureBeat account (for our posts) as well.