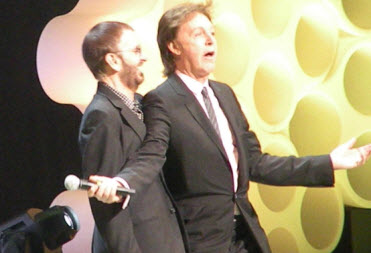 Time was Microsoft couldn’t get big stars to show up at its press conferences at E3, the big video game trade show. Not anymore.

Microsoft launched its E3 press event today with a tribute to the Beatles, as it gears up to launch the MTV Harmonix game The Beatles Rock Band this fall.

And Paul McCartney and Ringo Starr came out to take a bow on the acid-green stage to say they loved the game.

Though it was late to the video game industry, Microsoft has learned that E3 press events are as much about showing off your clout as they are about showing off great games. Microsoft’s Xbox 360 executive John Schappert also took the stage and said the event would be all about games, not charts and slides on who is winning the console war. The company showed off a mix of titles that are either exclusive to Microsoft or will also come out on Sony’s PlayStation 3.

In the Beatles game, you play instruments that serve as game controllers. It looks like a blast for multi-generational Beatles fans. Alex Rigopoulos, head of MTV’s Harmonix division, led a demo of the Beatles song Day Tripper to kick off the event at the USC campus in Los Angeles. Yoko Ono also came out and took a bow. 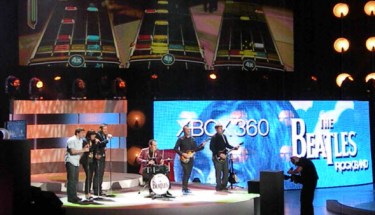 Next up to show off new games for the Xbox 360 was Tony Hawk, the skateboarding legend whose video game franchise has sold more than a billion dollars’ worth of games for Activision Blizzard. He showed off the new Tony Hawk Ride game, which comes with a faux skateboard that you can stand on to do tricks in the game.

After that was Call of Duty Modern Warfare 2, which featured a demo of a level where you could scale up an ice wall, take over an armed camp, and then chase after enemies fleeing in snowmobiles. It had some serious heart-pumping action. Activision Blizzard will launch two map packs (which extend the game with new areas where you can fight online) first for download on Xbox Live. The game debuts on Nov. 10.

Square Enix showed Final Fantasy XIII, coming to the Xbox 360 and the PlayStation 3 in 2010. Epic Games and Chair Entertainment showed off a shooting game for Xbox Live. And Microsoft Game Studios debuted a new title, Joy Ride, a cartoonish, Cars-like game where you can race around with other players over the Xbox Live online game service.

Another Xbox 360 exclusive, Crackdown 2, drew some cheers. The game is a sequel to an open world game where you play a  cop trying to stop a crime wave in a big city. Still another big title was Left 4 Dead 2, coming Nov. 17 from Valve. Ubisoft showed Tom Clancy’s Splinter Cell Conviction, which has been remade as a much more violent, visceral assassination game than its earlier version. When the game’s hero Sam Fisher punches enemies in the face, blood spurts out and bones crunch.

Microsoft also showed off Forza Motorsport 3, a racing game from Microsoft Game Studios. In this version, you can design and trick out your own car. You can then trade cars with other players. The game itself, from the cars to the environments you drive in, look outstanding.

Next, Bungie’s Joe Staten showed off Halo 3: ODST, a prequel in the blockbuster Halo franchise. Staten showed never-before-seen footage from the game, which will debut Sept. 22. Bungie also showed off another top secret project: Halo Reach. That game will debut in the fall of 2010. It’s evidently a game about the first Halo novel, dubbed The Fall of Reach. So that’s what the secret Bungie team has been working on.

Remedy also showed off a much-awaited title, Alan Wake, a supernatural thriller about a man in a small town in the Northwest. He finds he has incredible powers. Remedy finally showed a working version of the game, which has haunting music and very cool physics-based effects, where you can toss things around in the environment, like cars, as if you were a giant toying with play things. It’s slow paced, scary, and full of action.