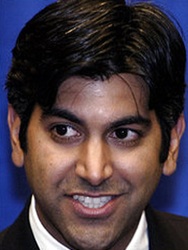 Back when Barack Obama was only a candidate for the Democrats’ presidential nomination, he generated lots of excitement by revealing plans to be the first president to appoint a chief technology officer. Since then, however, there’s been some confusion about what the job will actually entail, confusion compounded by Obama’s appointment of Vivek Kundra as the chief information officer (a role that seemed to overlap with the CTO’s responsibilities) and the fact that Aneesh Chopra wasn’t appointed CTO until three months into Obama’s administration.

Well, The New York Times just published an interview with Chopra that gets a little more specific about his priorities. Here’s what he listed as his four objectives:

And here’s how he said voters should judge whether he’s doing a good job:

The real question, of course, is how Chopra puts these generalities into action. The interview wasn’t totally devoid of actual plans, though. On the subject of using technology to spur economic growth, Chopra said he wanted to shift the emphasis of the government’s research funding from basic research to ideas that can be commercialized. I’m guessing there will be a mixed response to that idea, especially if Chopra makes a hard push in institutions that have traditionally been free from commercial pressures.