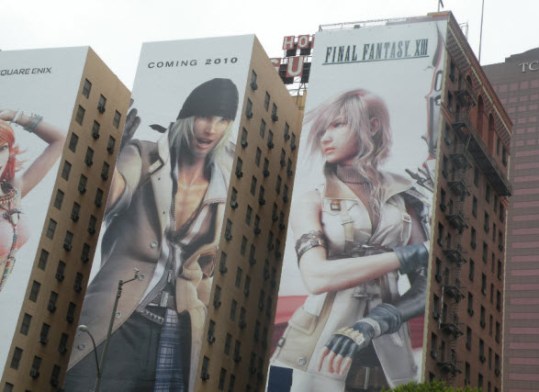 For a couple of years, even as the game industry entered a renaissance, the E3 trade show was lost in the wilderness. But this year, it made its way back to center stage, with the return of squeeze-through crowds, trillion-decibel 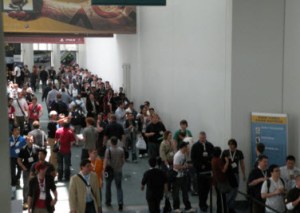 About 40,000 people attended the show at the Los Angeles Convention Center. That was 10 times more than the press-focused shows of the last two years, but a lot smaller than the 70,000 to 80,000 that attended shows of years past. This crowd size felt about right. You didn’t get stuck in crowds gathered around games or in between convention halls, and yet it was easier to tell which games were drawing the attention of the fans. 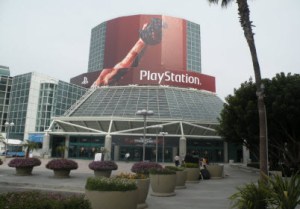 This year’s E3 was the video game industry’s way to show it’s no longer a stepchild in the pantheon of entertainment but rather the crown jewel of an entertainment field that is keeping people happy in the darkest of recessions. Top executives such as THQ chief executive Brian Farrell told me they felt the return of the crowds was worth the extra marketing expense.

The key thing about crowds is that they can focus your attention on a particular spot. There was a hidden gem in the back of the Warner Bros. Interactive Entertainment booth. A crowd had gathered around Scribblenauts, a game for the Nintendo DS that was very creative. You could write a word with a stylus on the 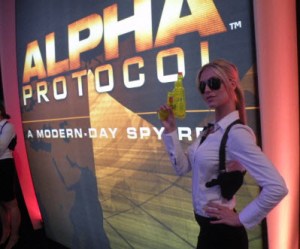 DS touch screen. Then that object would appear on the screen as a kind of drawn stick figure. Then you could use the object, such as a shovel, to solve the puzzle at hand. With the shovel, for instance, you could dig your way through an obstacle. If the crowd hadn’t been there, I might not have taken note.

Companies such as Electronic Arts used every inch of their maximum-allowed space of 15,000 square feet to show off big games on giants screens. On several occasions I saw people mesmerized by the computer-generated demo of Star Wars: The Old Republic.

That trailer in particular ignited the old discussion about game trailers, since the trailer was created by special effects house Blur Studios with film animation technology that looked much better than the actual game. BioWare leaders Greg Zeschuk and Ray Muzyka defended it by saying the trailer’s purpose was to get people excited about the story and become emotionally engaged in the game. 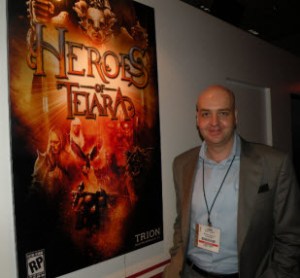 On the other hand, Lars Buttler, chief executive of Trion World Network, said that massively multiplayer online gamers would likely view the fake trailer with cynicism. His company chose to create a trailer based on actual game footage, which was admittedly less exciting than the Old Republic footage.

Trion showed off its Heroes of Telara fantasy game for the first time with features such as the ability to switch from character to character, from wizard to berserker, right in the middle of the game. To Buttler, this kind of game demo, shown in a small meeting room with the lights out, was the right way to show off games.

But there were plenty of other approaches. Sega showed off its Bayonetta game with a booth babe decked out as the powerful bespectacled witch, whose hair is entwined with her body to become her actual form-fitting black clothing. The company spent a lot of time searching for the right Bayonetta model. Sony Online 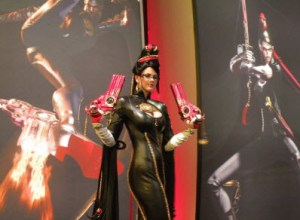 Entertainment also showed off its aging EverQuest title with a babe decked out as a queen. While not every big company had booth babes, they were a lot more plentiful than in past years. They posed for pictures with dudes, tossed out souvenirs, and belted out songs on Rock Band stages.

You could argue that booth babes are a relic of the show’s barbarian roots and the industry’s past focus on young male fantasies. Mike Gallagher, the president of the Entertainment Software Association, said in his keynote that people — particularly legislators trying to restrict the sale of violent 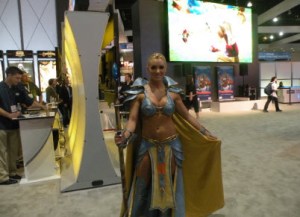 games to minors — continue to try to put the game industry in a strait jacket.

He noted that 68 percent of Americans now play video games. About 42 percent of U.S. homes have a game console. About 45 percent of all games are rated for everyone to play, and 43 percent of online gamers are female. The average player is 35 years old. I can remember when that was 28; it shows that gamers aren’t quitting games once they become adults.

As if to balance out the booth babes and acknowledge this expanding audience, there were also cuddly mascot characters such as the Teenage Mutant Ninja Turtles, 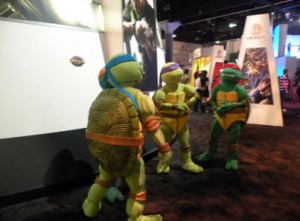 the Raving Rabbids, and the occasional male beefcake dude in warrior costume. The show doesn’t allow kids or the general public into the event. But these mascots were just as much in demand as some of the booth babes.

Just about every booth had viewing rooms with home theaters that people had to line up to attend. Celebrities, VIPs and media could cut to the head of the line, pissing off the fans. I managed to get into the demo room for James Cameron’s Avatar game, which is being developed by Ubisoft. No cameras, or even cell phones, were allowed into the room. 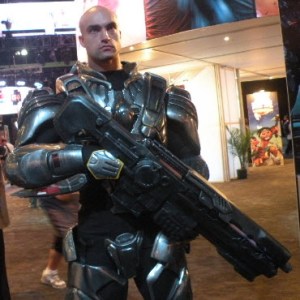 And I happened to sit next to Masi Oka, the star of the TV show Heroes, who confessed he was a gamer and had come to the show (wearing a baseball cap as a disguise) to check out the latest games. Cameron’s film producer, John Landau, gave a talk about the movie coming this fall, and Ubisoft walked us through the demo, which we watched with 3-D glasses on a 103-inch TV. That game looked a lot more like a movie, with dense rainforest settings and very detailed creature images. It was just the sort of thing to make you forget the show outside.

Celebrities were back in force, from Victoria Beckham to Steven Spielberg. Microsoft got Paul McCartney and Ringo Starr to come out on stage at its press conference to promote The Beatles Rock Band.

At the other extreme, there were fledgling independent game companies and other small firms showing off titles in an attempt to get a foot in the door of the $22 billion North American market. I went to a small booth for Korean publisher Ijji.com, which has created a portal of free-to-play games like Webzen’s Huxley, which has been five years in the making. Those games are fun run-and-gun experiences, and they hope to be the mammals among the dinosaurs as the world shifts more to online distribution. 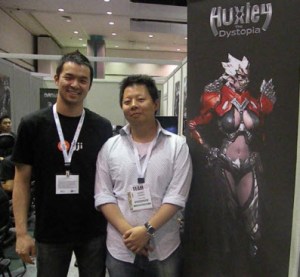 Of course, one of the old guard in the business, Sony Online Entertainment, appears to have hit the first big North American smash with the launch of the free-to-play Free Realms, which has more than 2 million registered users in a couple of months.

As for the press conferences themselves, I believe Microsoft won on a variety of fronts. It had cool teasers with titles such as Metal Gear Rising (the first time that title will come to the Xbox 360), Halo Reach, and Project Natal. They had a solid line-up of games for the fall such as Halo ODST, and some nods in the direction of user-generated content and new business models with Joy Ride. They also showed an innovative new thriller title in Alan Wake, where you use light to keep back the creatures of the night. It was the right blend of teasing, real demos, and technology vision. 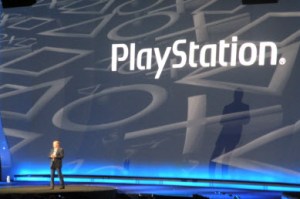 Sony had some great games in Uncharted 2: Among Thieves, God of War III, and Massive Action Game. It also launched the PSP Go, showed off a cool user-generated content game with Mod Nation Racers, and teased its motion-sensing magic wand. Sony definitely had more of the games I am really looking forward to playing myself. But it failed to cut the price of the $399 PlayStation 3, and its motion-sensing scheme didn’t seem nearly as ambitious as Microsoft’s.

Nintendo managed to make a nod toward creativity with its Wii Vitality Sensor, but it didn’t show off a game that made use of it. Nor did Nintendo show off a glimpse of an expected Zelda game for the Wii. It was left with staple hits such as Super Mario Bros. for the Wii and a Metroid title. While Nintendo has the most momentum from casual gamers, I thought it had the weakest press conference. That’s not going to make a difference in the grand scheme of things. Nintendo has a firm grip on mass market gamers, with a two-to-one lead over its nearest competitor. But I hope it generates more surprises in the future. 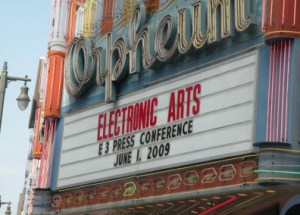 Electronic Arts had a dozen huge games to showcase. But I still worry it may not have the right games to generate hit sales of five million or six million, rather than the moderate-size hits of one or two million units sold. (Isn’t it funny what’s considered a blockbuster hit these days?)

Some of the titles such as Dante’s Inferno and EA Sports MMA seemed like copycats of God of War and THQ’s Ultimate Fighting Championship, respectively. They might be smart business moves. I’m sure that EA is going to put an enormous budget and creative force behind those titles, but they don’t seem like breakout hits that could dominate an entire category. I appreciate the company’s focus on quality titles, but as a company they’re not completely out of the woods yet. 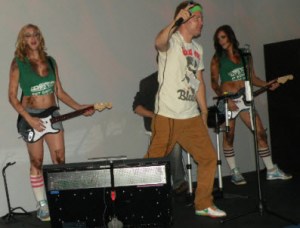 Activision Blizzard seemed to have a much stronger line-up with the coming Starcraft III, Diablo III, Call of Duty Modern Warfare II, Tony Hawk Ride, and others. It will be very interesting to watch how the battle between EA and Activision Blizzard shapes up. As for the longest and most boring press conference, that title goes to Ubisoft, which had one of the coolest games in Avatar but didn’t show it on stage. They almost made up for it by showing outstanding demos of both Assassins Creed II and Tom Clancy’s Splinter Cell Conviction.

As tired and grumpy as some of those events made me, I was still thrilled to see the old E3 back in fighting form. I was very happy with the way this year’s show turned out.