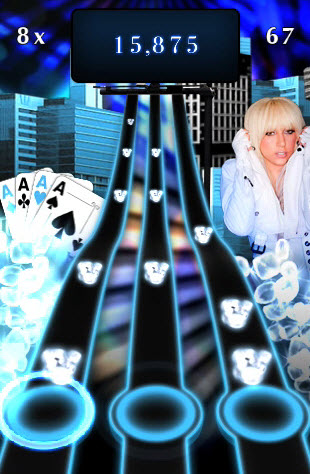 Guitar Hero may reign on the video game consoles. But Tapulous rules the rhythm music game business on the iPhone.

In recognition of that, the major Hollywood music company Universal Music Group has struck a partnership with Tapulous to bring Universal’s musicians to the iPhone and iPod Touch. Tapulous makes the Tap Tap Revenge series of games that have been installed on about 11 million of the 40 million iPhone and iPod Touch devices sold to date. According to comScore, Tap Tap Revenge was the most popular iPhone app in April.

The fact that Tapulous continues to release new versions of the game seems to be what keeps users interested. Just a month ago, the company released a version of its Tap Tap Revenge game featuring music from the Dave Matthews Band. And this latest deal with Universal clears the way for the launch Tuesday of a version of Tap Tap Revenge that features artist Lady Gaga. The game debuts in the AppStore for $4.99.

Universal, a subsidiary of Vivendi Universal, has a huge collection of artists. David Ring, executive vice president of Universal Music Group’s eLabs division, said that the deal is a way to strengthen the relationship between artists and fans.

UMG’s artists will be part of Tapulous’ third major version of the game, Tap Tap Revenge 3.0. Users can buy hits for 50 cents per track. Those tracks can be used in the upcoming game, an example of in-app commerce in the new version of the iPhone, dubbed iPhone 3.0. Tapulous is also working with UMG on an unnamed new rhythm game featuring a top UMG artist, for release in the fall.

If and when Activision Blizzard does try to storm the iPhone market with its Guitar Hero brand, it will find an entrenched Tapulous already there.