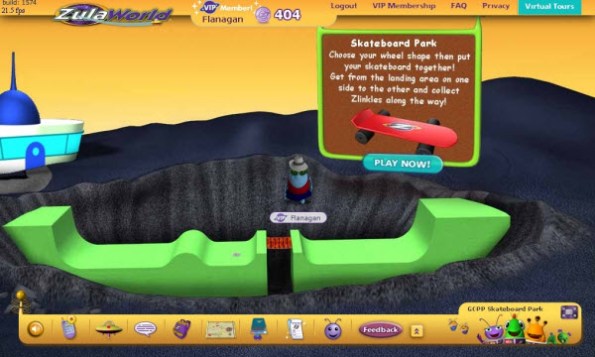 Hoping to add an Internet dimension to its growing kids business, Zula USA has launched a successful kids science education TV show in the past three years and is now diving into the vitual world market.

The Burbank, Calif.-based company quietly launched its ZulaWorld virtual world for kids on June 1 and just filled me in on the details of its new offering. It has about 1,000 members so far, and it’s all in the name of making science fun.

The TV show, Zula Patrol, on PBS and NBC revolves around aliens who travel from world to world and solve various problems using science. In the virtual world, kids can create an online character, or avatar, and become an alien. They can fly their own spaceships and customize the garages where they park them. They can play mini games within the world that help teach scientific principles, said Deb Manchester, creator of the Zula Patrol. Zula Patrol and ZulaWorld both focus on kids six and older, along with their parents and teachers.

A game where you have to catch moles dropping from the sky on a level teaches kids about the principles of leverage. Moles of different weights alter the balance of the lever, which is like a seesaw. The weights are different on different planets as well.

Players can also race around Saturn’s rings in “bumper” spaceships, like a bumper car carnival ride. At the skateboard park pictured above, kids have to figure out what the right size wheels are for their skateboards. In a Venus game, kids can capture a cloud to learn about weather patterns on other planets.

ZulaWorld may have a tough time getting noticed, since there are some 200 other kids virtual worlds either in development or already operational online. But Zula has a couple of advantages. IBM is investing in the Zula project by offering in-kind services such as technical support and infrastructure design for the virtual world. It is part of IBM’s mission to support education through its Smarter Planet initiative, which is focusing on developing educational virtual worlds. IBM Research is helping as well.

Under the deal, IBM is providing help for free now and may share in future revenues, said David Laux, an IBM executive.

ZulaWorld is also likely to get enormous visibility because of Zula’s TV show.

Zula USA is financed with $20 million in private funding from an anonymous investor who believes in kids education, Manchester said. It has about 30 employees. Zula is working with Canadian game developer Bash Bang to make video games as well. Zula Patrols airs Saturday mornings on NBC and throughout the week on PBS.

The basic game world is available for free for visitors to the site. A subscription to ZulaWorld.com unlocks more levels. Subscriptions rates are $5.99 a month or $49.99 a year.