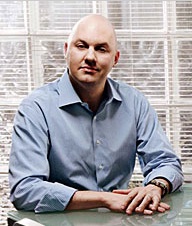 Well-known angel investing partners Marc Andreessen (pictured) and Ben Horowitz have finished raising money for what has become a $300 million venture fund, according to an article in BoomTown that cites “numerous sources close to the situation.”

Andreessen, who co-founded Netscape and build-your-own-social-network startup Ning, first announced the fund in an interview on the Charlie Rose Show. At the time, he didn’t reveal the total size of the fund, but Andreessen said the goal is to “preserve and extend” the model he has been using for his angel investing with Horowitz, a former Opsware executive. The investments will range from $200,000 to $1 million, with $500,000 as “typical” — so we’re still talking about young, probably web-focused companies.

Andreessen’s angel investments include the impressive lineup of Facebook, Digg, Twitter, and LinkedIn. Backers for the fund include “institutional investors” (such as universities) and “a spate of Silicon Valley luminaries,” BoomTown says, and it has been given the rather unimaginative name of Andreessen Horowitz.

I’ve emailed Andreessen for confirmation but haven’t heard back yet.